The Himalaya was nature’s gift to Nepal when, millions of years ago, the Indo-Australian Tectonic Plate collided with the Eurasian Tectonic Plate, forming what is now called the abode of snow (Himalaya).  It is, according to geologists, the youngest group of mountains on planet Earth.  The tectonic plates are still moving at a very slow pace of 67mm per year, making the Himalayan peaks prone to earthquakes.  The mega-earthquake of 2015 that devastated parts of Nepal is still fresh in the memory.

Because the Himalaya was thrust upward by squeezing the landmass from the bottom of the ocean, the mountains contain lots of oceanic minerals and deceased ancient marine creatures.  They are a rich repository of all kinds of minerals, stones, gems, marine life, and fossils that may be mined and harvested for commercial purposes.  I am always amazed at how the ancient rishis, without the help of modern tools and techniques, were able to know what modern scientists, with the help of modern gadgets, can tell us only thousands of years later. 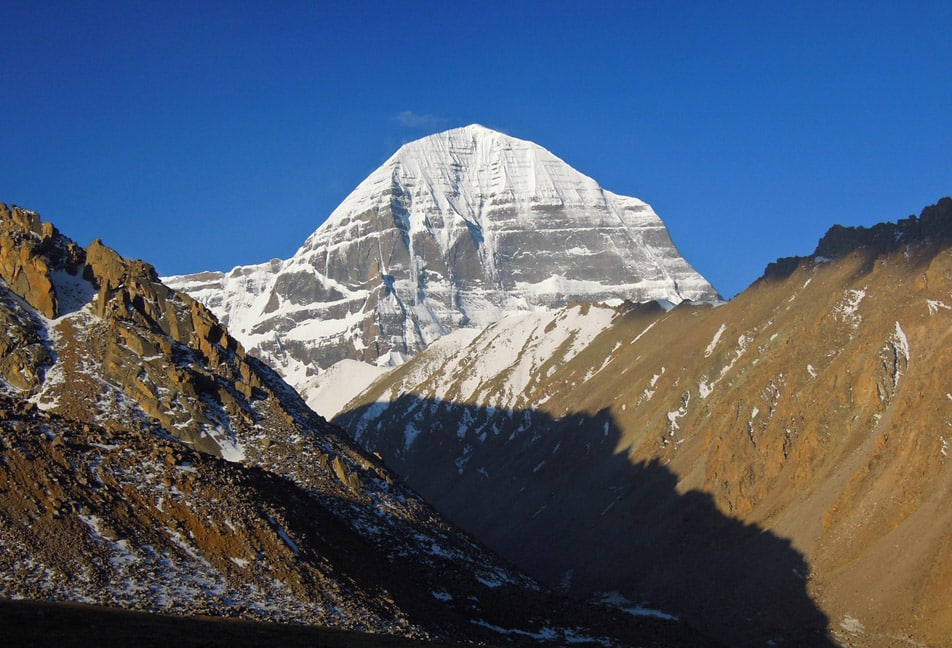 Hindu texts such as the Himavat Khanda of the Skanda Purana and the Shiva Purana clearly describe the Himalaya as having many lakes, peaks, flora, and fauna, and depict the beauty of the mountains as though they have vividly seen them with their own eyes.

The descriptions also mention gold and other metals, precious stones, medicinal plants, trees, and herbs found in the mountains, lakes, valleys, and caves of the Himalayan peaks.  Appropriately, the texts describe these mountains as being fit for the gods and, hence, they are where the gods live. Many Hindu gods and goddesses are believed to have taken up residence in the Himalaya.  Because the Himalayan mountains are the abodes of gods, they are considered sacred by Hindus and Buddhists alike.

The Goddess Parvati is said to be the daughter of the mountain called Parvata.  Mt. Parvata is called “Little Kailash,” or Om Parvat because one can see the letter Om when snow is deposited between the recesses of the mountain summit (see photo).  This mountain is located in the Darchula district of Nepal, making Parvati the daughter of Nepal.  Mt. Kailash, on the other hand, is the abode of the God Shiva.  The sacredness of these mountains is obvious, for many of them are named after Hindu gods and goddesses – Gauri-Shankar and Nanda Devi, just to name a few (see photo).

I finished reading the Shiva Purana, an ancient Hindu text in praise of the God Shiva.  It is one of the required texts for the Hindu mythology course I am currently teaching at Claremont School of Theology.  It’s a rich text for those who are interested in the study of the Himalaya.  Although it’s not a scientific study in any sense, it provides such beautiful descriptions of the environment, the landscape, and its treasures.

There is a dialogue between Sati and Shiva in the Shiva Purana worth citing.  Seeing the dark monsoon clouds forming in the sky, Sati is concerned about the torrential rains the monsoon will bring.  She wishes for a home like all wives do.

“Shiva,” Sati says to her husband, “please make me a home on top of the Himalaya.”  Not a palace, but a home where the two of them can live happily without the fear of Monsoon rains or the winter cold.  Shiva asks Sati, “On which mountain would you like me to make the home for you, my dear –Kailash, Sumeru or Jambu?  Choose any one of them you like – no rain clouds reach the top of any of those mountains.”

But Sati chooses the Himalaya instead because she wishes to be closer to Mena, her future mother.  According to the story, Sati commits suicide by jumping into the agnikunda (fire-pit) built by her father Dakshaprajapati during a huge yajna ceremony.  On seeing Sati, who was not invited to the yajna, enraged Daksha shuns Sati and belittles Shiva in front of the invited guests.  Unable to tolerate the accusations made against her loving husband, Sati chooses to die than to live.  After Sati leaves her physical body she is reborn as Parvati to Mena and Mt. Parvata located in the Himalayan range, not far from Kailash.  Kailash has been the choice of the mountain for Shiva for eons.  Other demigods, such as Kubera, the god of buried treasures and wealth, live near Kailash.  For all these reasons, Sati chose Kailash above all other mountains, as we will see below.

Shiva agreed that the Himalaya was, indeed, an ideal location to build a home because there was plenty of clear spring water to drink, trees like Kalpavriksha to be found, and Rishis lived there as well.  The Himalaya is home to many Devas (gods) where the roads are made of glistening gold and silver and decorated with crystals.  Lotus grow in its blue lakes, their stalks encrusted with jewels; the lakes where birds like Sarasa and Chakravaka roost.  Shiva again gave Sati a choice between Mt. Meru, where the beautiful and enchanting Apsaras like Rambha, Sachi, and Menaka live, and Mt. Mandara, where the gods live.  Once again, Sati chose the Himalaya.

This is a beautiful tale of the mountain with which the Goddess Sati falls in love and wishes to make her home.  Mt. Kailash is, of course, where Shiva lives, and this, too, is located in the Himalaya.

The sacredness of the Himalayan peaks is borne out by many Hindu texts where it has been praised for its special healing quality.  Himalaya is also the destination for sages and individuals who seek knowledge, even today.  At the present time, however, foreigners –primarily Westerners – go to the Himalaya with the purpose of conquering it; they want to plant a flag of victory on its summits.  This gives them 15 minutes of fame by capturing media attention.  The Nepalis, however, take it for granted and do nothing to respect or preserve it.

The Himalayan peaks provide clean air (oxygen), clean glacial water, medicinal herbs, and valuable minerals; these and many other things – oils, gases, crystals, quartz, roots, and biological organisms – that may be beneficial to life.  These are gifts of the Himalaya to the inhabitants below.  The Nepalis should feel fortunate that they live in a land where the Himalaya blesses them with its magnificent gifts.