Search
Often times, we come across a dish that looks delicious, and tastes amazing. But then, it lacks something that we cannot put a finger upon – perhaps it was a little bland, or missing a hint of vinegar or just a tad overcooked. It makes you realize that the dish could have been better than it was. Brazesh Khanal’s Yayavar is just such a novel. At first glance, it seems to have everything needed to rouse readers — saucy childhood tales, a fair dose of dramatics, interesting romantic angles, lustful titillation, plots of revenge, a shred of mystery. It is relatively well-written and smartly packaged. However, you are always left with the feeling that it could have been much, much more than it currently is.
The novel’s plot is, well, a bit unusual. Suffice it to say that it chronicles the life of a seemingly normal but apparently sexually frustrated individual in his fifties. He is neither impotent nor lacking in desires, as we find out plenty of times. Why, then, is he unable to give in to his amorous desires even in the presence of beauties the like of which are only known to prance in Fashion TV? That is what the tale is all about. The reason is not unconvincing, either. To some, it might appear to be slight, but that one incident (and the chain of events leading from it) has shaped the protagonist’s life, not unlike what Amir experiences in The Kite Runner. 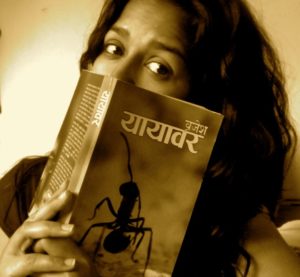 The pain of Yayavar, seeps into my eyes.

Yayavar’s strength lies in the ease of narration, and the remarkable use of cause and effect. The story is actually read through the eyes of a character, and it reverts to the past before jumping to the present, but it is easy enough to follow, understand, and accept. One incident leads to the other, and the reader is gradually drawn into the world of Baikuntha, a normal Nepali youth whose fate has strange things in store. At times the plot gets engrossing, such as when an extraordinary twist of events leads Baikuntha’s Juneli right into his arms, or when stranger events drive her out of his life. Of course it is not always interesting, there are inconsequential sub-plots and annoying characters that just bore readers, but the narrative tries its best not to lose direction.
Another commendable fact about the novel is that it does not infantilize childhood, nor adolescence. There is no sugarcoating of roaring teenage hormones and escapades, many times threatening to spill over into the explicit and the obscene. It is quite reminiscent of Dhruba Chandra Gautam’s childhood exploits in Daapi, which would be quite sober compared to the lingo of Baikuntha’s mates, particularly Kalo Ram. In fact, the Terai-fuelled, rustic, warmly hilarious portions of the novel will bring to mind Nayan Raj Pandey’s excellent prose, particularly Lu, while sections of childhood revelry, especially Baikuntha’s relationships with his parents. will remind readers of Karnali Blues.This could be intolerable to purists, who might think of the ruse as a caricature of popular fiction. But it is likely to appeal to readers who do not mind too much of a good thing.
Readers might also fall for the casual tone of the novel, which does not profess to be high-sounding, and keeps itself anchored to the grassroots. However, at times, it does seem as if the author is trying too hard to be flippant, the struggle to simplify dialogues or descriptions can be noticed. As a result of this, dialogues are mostly good but rarely brilliant. The characters are believable and dynamic, and Juneli as the female protagonist is particularly lovable, if too shackled by traditional dogma. The most perfect portion of the book, which readers are sure to appreciate for its sheer beauty and pathos, is the climax. It is not a new technique by any means, but it is only one of the two endings that could have done justice to the novel. You hope against hope that the novel has a different ending and yet, when it does end the way you fear, you are satisfied. The thread of longing, of unfulfilled yearning, that runs through the entire novel comes together to explode at this point.
At times it seems as if the novel tries to include everything within its restless spirit, suffocating readers with the deluge of information and incidents and characters, the mash-up threatening to melt into a homogenous lump. Other times, the author can be seen to be hurrying through the pages, paying scant attention to details, just to get to a certain point. That definitely takes away from the charm.. But then, all at once, the tangled wires begins to make sense, and Yayavar returns to being what it set out to be – engaging, humane, and touching. And that is reason enough to read it through.
Text: Yayavar
Genre: Novel
Price: Rs 295
Pages: 209
Publisher: Orchid Books
Please visit author’s page  to make comments.
The book review was originally posted in Republica, April 5, 2013.