Yesterday, near my village, I heard a comment from an elderly saying that the earth is trembling because the menstruating girls are touching books, praying to gods and not following the rules. NEPAL’s earthquake might have shaken the mighty earth, tallest monuments of Nepal, world heritage sites and hundreds of temples but some superstitions still remain tall and strong as they were before the earthquake.

After hearing such comments, I was furious but also glad that I initiated a campaign of distributing sanitary pads/napkins to women and young girls affected by this devastating earthquake. If you are a woman, you know how important sanitation is during this time. Just imagine losing your home, your clothes, not having running water for a bath and not having medicines to deal with the pain and cramps. You have no proper bathroom; you are living outside in the tent in the open field with dust, dirt and mud. And, on top of that, you get your period in a place where menstruation is still a taboo for many older generations. Can you imagine going through this terrible situation? It seems pretty difficult, right?

Most of the Nepalese women still use cotton clothes as sanitary pads which are washed and reused. In the aftermath of the earthquake, where the scarcity of food and water had hit, the reuse of such sanitary napkins has been out of question. The thought of what the girls and women would do except for remaining inside the small tent and being unable to speak a word about it is unbearable. Also, there is an equally higher risk of urinary tract infections. So, I decided to start this campaign with a few hundred rupees donated by my family members including my 8 year old cousin. I added my own savings and was able to buy 120 sanitary pads the next day. I went directly to the victims with my two friends and distributed them to whoever needed the pads. There was a rush of people to get the packets, even those who were unaware of what it really was.

Women are the most impacted in such disasters and given most Nepalese men are working abroad in gulf countries, villages are full of housewives and children. The need for the sanitation for women and girls became crystal clear in my first visit to the affected areas. I needed more sanitary pads and I needed help.

I reached out to my friends, different women groups and the same evening I shared my stories with Rising Junkiri and was immediately provided with Rs.15000  to continue the campaign. I was able to buy 600 more sanitary pads and we gathered next day to distribute those pads directly to the women and girls in need in the affected areas. Not all were supportive of these ideas, as some negative tweets/status surfaced in media. Some believed these aren’t priorities and even compared it with condoms. In a male dominating society, any necessity of women is considered a luxury and this wasn’t a surprise to me as we always have to fight against the norm and we will continue to do so. Many brothers and sisters in Twitter and Facebook were very supportive of the idea and even helped further to continue this campaign. 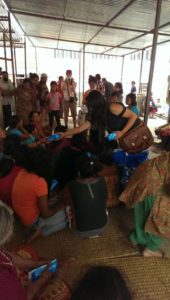 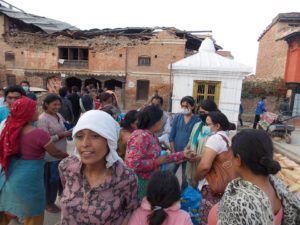 On the fourth day after the earthquake, I went to one of the most affected parts of Kathmandu valley, a beautiful ancient town and home to very generous people, Sankhu. The city was badly destroyed and hundreds of people were living in the tents away from their homes. The city seemed to be dead and frightening. People left all of their belonging as they were and left their homes to live in the tents. We went to each and every tent in that village to distribute the sanitary pads. We met some inspiring teen girls, who helped us locate the needy people. They told us that they are going to the rural areas to help more unfortunate people despite losing their own homes. We were really moved when they suggested us to go to rural areas and help those people who did not have anything.

With every passing day, there was someone who funded us to get more sanitary pads and every morning we decided to go to some affected areas. There were people who were eager to help and many showed up to volunteer and distribute. We went to different old towns around Kathmandu city: Bungmati, Lubhu, Harisiddhi, Chapagaun, khokana, Kirtipur and Bhaktapur in span of few days. We also donated sanitary napkins to volunteers going to rural areas, so the women and girls in the rural area would find some kind of temporary relief.

One of the women in a camp in Bhaktapur said, “I wash the reusable cotton sanitary pads during night so that no one will see me! And dry them by covering with other clothes.” Such are the sufferings of our women right in the midst of the disaster. Keeping in account, proper hygiene and sanitation, we even started counseling about proper use and disposal of sanitary napkins

I believe we are resilient people and we will bounce back to normal life very soon. Till then, it is very important that we keep our family strong with support and care. My friends and I are still actively working to distribute the sanitary pads and to counsel women about the proper use and disposal. We appreciate every help that will come our way.If you want to donate to the campaign, please donate here to show your support: 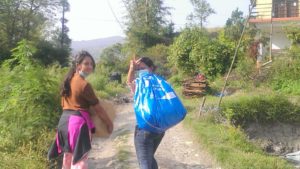 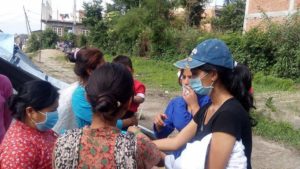 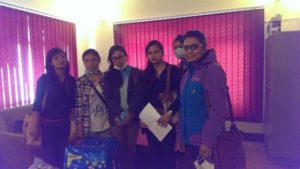 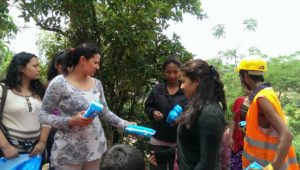