In 2007, a lights off event in Sydney Australia was started which became famous worldwide. Currently, the event is held annually as Earth Hour in more than 7000 cities in order to encourage individuals and communities to turn off their lights that are not essential to them for one hour, from 8:30 to 9:30 p.m. Earth hour is now a worldwide movement organized by the World Wide Fund for Nature (WWF) and engages a massive number of people working on different aspects of environmental issues. The one hour event has become a larger movement motivating people to conserve energy worldwide.

Earth hour was celebrated in Basantapur, Kathmandu on march 28th with immense support from the general people. The event included information from environment activist about Earth Hour, one of the most popular bands playing music and lots of people lighting the butter lamps. Here are some glimpses of the event: 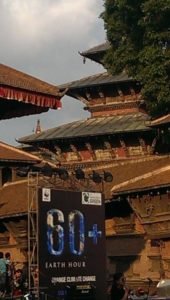 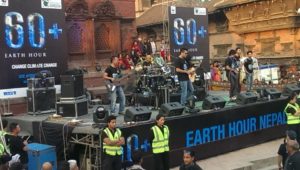 1974 AD performing on stage for the event 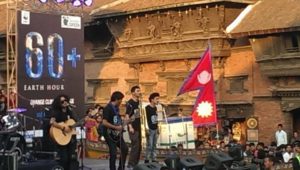 1974 AD performing while the national flag is flutters around

HAPPY EARTH HOUR to people around the world!!! Don’t forget to turn off your electronics and lights when not in use.