Why feminism is important over the past few years, a lot of words and trends have been all over the Internet. Be it in the time of the amazing color changing dress or KUWTK memes, the Internet has always had new things to post about. Amidst all of this, a word got really poplar with millions of hashtags and that is “Feminism”.

The opinion about feminism varies from person to person. Some say that it is nothing but a word used by females who want male attention, some believe it is all about man, some as a term that is used to show that women are and will always be one step ahead of men. So what really is Feminism? I would’ve never written this article if I was not labelled “Feminist to her core” by so many people for so fewer reasons. To quote someone with a very complicated name, I don’t precisely know what Feminism is about but people call me one even when I share my opinions on a doormat. I don’t remember the exact date but few years back, when I gave a thought-provoking speech on “Women Empowerment” at school. Obviously it wasn’t the first time I spoke on something related to women. People liked my speech, appreciated it and there was this guy who said “oh god stop being a feminist!” I didn’t know how I was being a feminist by speaking about empowering women. Also, I didn’t know what feminism was.

I still remember vividly, the tune in which he said that was exactly how we say, “How can you even support terrorism”. Years went by and I began understanding what feminism is about. In its true sense, feminist is in fact a person (man or woman) who works for equality and is a women rights advocate. And that was that. I still don’t have the guts to tell myself people actually hate feminism and feminists. Going back in time, it was when I was in primary class; my teacher announced that she’d take a test and whoever scored the highest would be the class monitor. And it was a big dream because the monitor gets to write the list of “Talking names” on the board (woaahhhh). We had our tests and I scored the highest.

My score was shared by another girl in my class. Going back in time, it was when I was in primary class; my teacher announced that she’d take a test and whoever scored the highest would be the class monitor. And it was a big dream because the monitor gets to write the list of “Talking names” on the board (woaahhhh). We had our tests and I scored the highest. My score was shared by another girl. A boy scored the second highest and he was made the class monitor. My teacher forgot to mention that a monitor was to be a boy because she thought that it was um, obvious. I remember crying myself to sleep that night. My 10-year-old heart learned it the hard way that girls are deprived of many things in life; starting from going out to being the class captain. I go in flashback when I was called a girl for the first time. It was said with a sneer. Like, it was something guilty to be a girl because it is shameful to hit like a girl, run like a girl, throw like a girl or just be a girl. 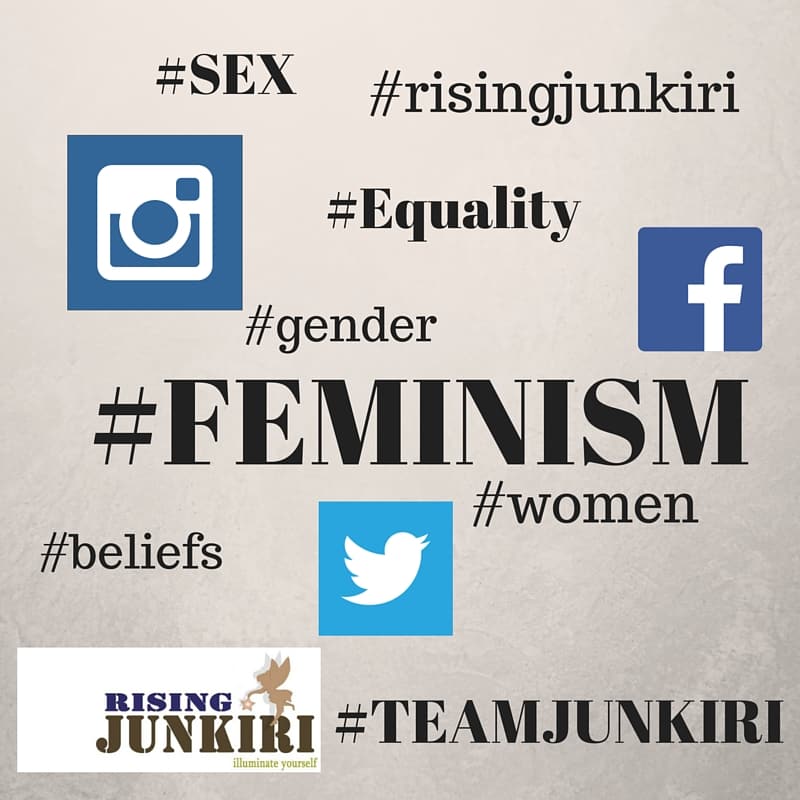 Moving further and being passionate about poems, I came across Rupi Kaur, a poet. She uploaded a picture where her pant was drenched with period blood. It was a shock when I learnt that Instagram had apparently deleted the photo twice as period blood goes against their community guidelines. (How cute!) Period is innate, we girls go through it every single month and when you admit that you have your period you are an attention seeking for person. Yes sure, you may say it wasn’t necessary to upload that photo but it was uploaded to make period and bleeding normal. It is Natural.  But, Instagram is filled with posts of naked women, so many who are probably underage and surprisingly that is not against their “community guidelines”. Also, the founder of Instagram, don’t forget your existence is possible when this process of bleeding occurs.

I and my brother were going to some place last month and the car in front of us was driving very roughly. My brother with no shame behind his eyes yelled, “Girls don’t know how to drive.”

But the driver was a male. (Like whaaaaattt) So we have this stereotype, that a bad driver is a female, someone who sucks at Math is a female, that females don’t talk in family matters (when clearly, females also have a big role in building a family), that when men say “no”, it is a matter of self-respect and when women say “no”, she becomes someone “playing hard to get.”

I’m sorry I’m not trying to bring a gender war here but this discrimination makes me angry.

To conclude, Feminist is simply a person who is a women rights advocate. It has nothing to do with man hating. It is all about working hand in hand for the greater good of both the genders. It is not about the clothes we wear, the heels we wear for impressing or not impressing anyone, for selecting pink over everything. It is about working for women empowerment in all forms. I’d like to add something I read on the Internet, don’t think that feminism is for females just because it has the word “femina” in it, when in fact the entire human race has been called “man”kind. If girls feel weird to talk about feminism, how can we expect boys to do that?

So I almost feel sorry for all the people who thought feminism isn’t important.

Because if I’m a feminist, what are you?