Why can’t we put our smartphones down?  We use them while driving, eating, sitting in a lecture hall, and in the company of friends and family members.  What’s so important that we risk of getting into a serious car accident or being blacklisted as anti-social?

It’s on the news all the time: people gravely injured or killed because they used a smartphone while driving.  It seems that we love our phones so much that we are unwilling to separate from them, even for a minute.  We clutch them in our hands all the time, like lovers holding hands.  We use our phones to talk and text, even while walking down the street – until we crash into a stranger, bump into a lamppost, or fall into a ditch.  Videos of such incidents are funny to watch, but they aren’t laughing matters in light of the loss of life or property.

What is so important that it can’t wait an hour or so?  Are these activities more important than our own lives?  The smartphones of today come under the guise of an enchanting temptress that grabs the user’s total attention and takes control.  Once under her control, the user becomes dysfunctional and loses all sense of reality.

Just as there are alcohol and drug addicts, there are smartphone addicts.  And while it’s surely a global phenomenon, it seems to be especially prevalent in the U.S.  I’ve seen people in the streets, in lecture halls, and even in my own home glued to their device, be it a phone, an iPad, or an Android tablet.  It makes me question what it is that we’re attracted to.  Is it the instant gratification of being able to connect with others, find information, watch a video, or listen to music at the touch of a button?  I think it’s a combination of everything, but here I will focus only on the phone.

I find it ironic that these devices are called smartphones, as they’ve made the users quite dumb – unable to distinguish right from wrong and safe from unsafe.  If a device doesn’t help you manage your life smartly, can we really call it ‘smart’?

A case in point: a husband kills his wife for having a secret affair with another man for years.  He discovered it only when he checked her phone and found – to his surprise – many lewd messages, and even compromising pictures of her.  Enraged, he killed her for the betrayal of the trust.

It seems to me that the phone of today has been weaponized.  Just recently, the National Enquirer threatened the richest man in the U.S., Jeff Bezos.  Unless he signed an agreement stating that the publication of his affairs in National Enquirer wasn’t politically motivated, they would publish compromising photos of him and his girlfriend.  This Bezos termed ‘blackmail’ and ‘extortion.’

Before the smartphone was born, it simply wasn’t possible to hack into another person’s phone to carry out such nefarious activities.  So while the phone of today allows many wonderful benefits that make our lives easier, it also causes many unwanted headaches.  Through it, our private life becomes public – as it happened to Jeff Bezos, CEO of Amazon.  It can be used for eavesdropping, blackmailing, tracking an individual’s whereabouts, and more, potentially putting us (and our data) at risk of extortion, political espionage, and worse. 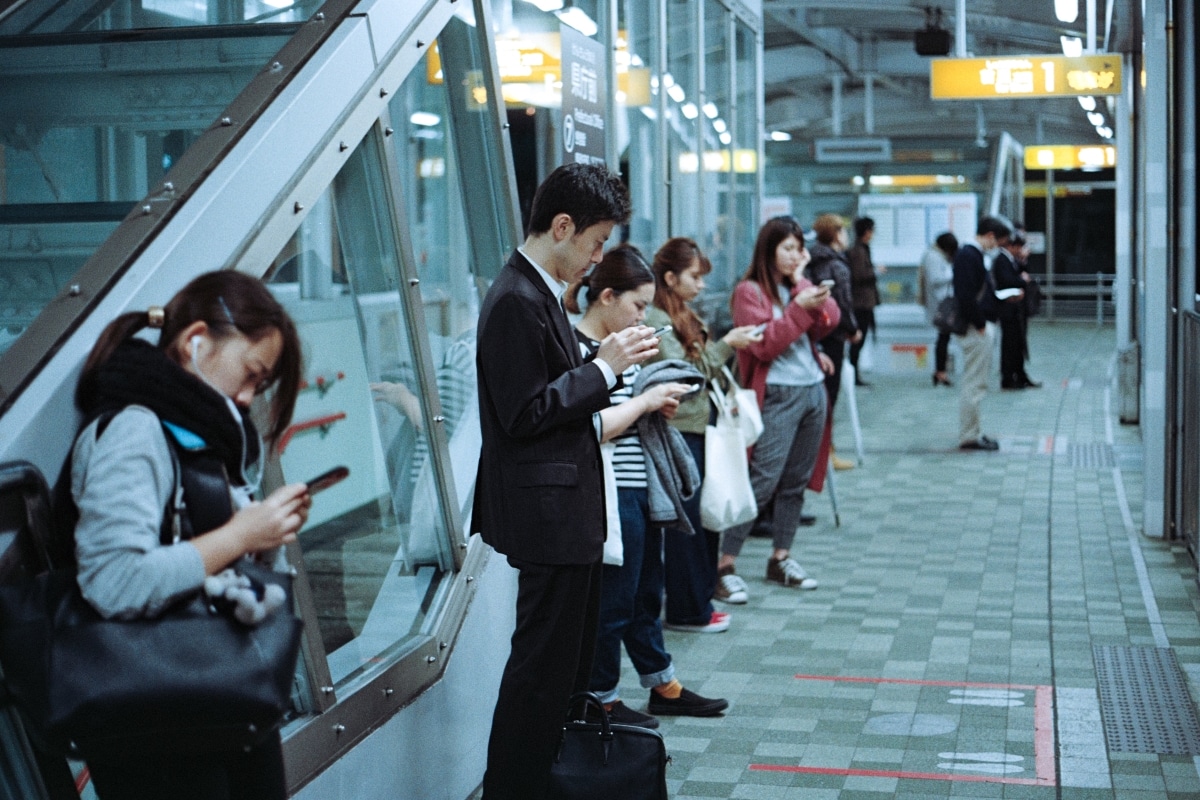 Passengers check their phone on the train station in Japan.

Impact of the smartphone on society

Perhaps even worse is the loss of human interaction since the advent of the smartphone.  We talk less and text more.  Even when we meet at a party, meeting, or conference, many of us are glued to our devices rather than interacting with others.  A Bloomberg reporter writing about the impact of the smartphone on society said, “The more time we spend with our devices, the more time we need with actual human beings.”

The ability to text seems to have taken away our need to talk.  It’s ironic, isn’t it, that the phone was invented so that we could talk, but we now rarely use it for that purpose?  Instead, we rely on it to text, pay bills, listen to music, and order food. We are giving a rest to our vocal cords.

Some sociologists are sounding the alarm about excessive smartphone use.  They see the signs of loneliness in human beings – because humans really are social creatures.  And although we belong to many social groups through social media, we are alienating ourselves from friends and family.  Social networking has become a popularity contest, and those who express different views – especially political ones – are often unfriended at best, and attacked at worst.  We make decisions based on the number of ‘likes’ and comments something might get, and rather than building a community, this has created division and fragmentation.

Our obsession with electronic devices is leading us down a path an impersonal society ruled by artificial intelligence.  This will create a world of its own – a cyber world – and eliminate real human beings from the scene.  The trend that is rapidly emerging among the younger generations is alarming, and we’re heading towards a society in which there is minimal human bonding.

Already this has resulted in many incidences of suicide, with loneliness, cyberbullying and cyber rejection being the main causes.  And if things do not change, this downward trajectory will continue.  We’ve already become slaves to the smartphone.  How far will we let it go?