It all started on Thursday with a Tumblr post by Swiked. She posted a picture of a dress and asked to identify the color of dress. She wrote “Guys please help me-is this dress white and gold, or blue and black? I and my friends can’t agree and we are freaking … out.”

The solid scientific explanation given by ASAP Science about the color of the dress is that this an example of a phenomenon called color constancy. This phenomenon ensures that the perceived color of objects remains relatively constant under varying illumination conditions. So the context in which an object we are looking at appears, influences our perception of the color of the object. In this case, the dress is photographed in so close up that our brain does not know the actual context or surrounding environment of the dress. Thus, our brain starts to make interpretations about the context light. If people envision that the dress is located in a room with bluish natural daylight near a window, they may perceive it as a white and yellow dress. On the other hand, if some envision it to be around some artificial, yellowish light, then they perceive it as a blue and black dress, which is, in fact, the actual color of the dress. 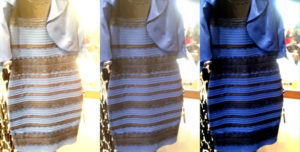 It is not still clear if it is the lightning of the surrounding or the color of the dress itself, that causes the difference in perception of the color by different people. And the war is still ON. The dress actually appears white and golden to me. Let us know what color does the dress appear to you???

And for those who are still in doubt (I am one of them, I see it white and golden), here is the real picture of the dress from the wedding. And Yes!!! it is blue. ENJOY!!! 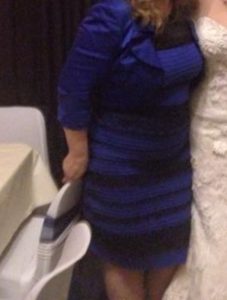