Dear Wayne, it was Euro 2004 that I first got the glimpse of you. As an England fan (thanks to David Beckham for both club and country support), I was watching you (the 18-year-old kid)  play for the first time as a 13-year-old kid myself. As you scored two goals against Switzerland, I became your fan instantly, secretly wishing to see you in United’s color. Two months later, my wish came true and you were the most expensive teenager in Britain’s history. What a signing you were. 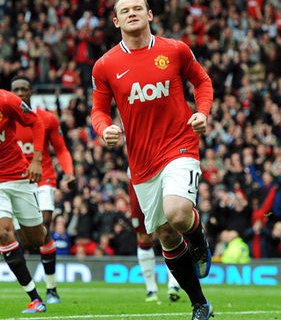 David Beckham inspired me to watch football and support United. But it was you, Wayne, who made me fall in love with this game. You were talented, passionate, hungry for goals, aggressive and tireless. It was such a privilege to watch you play. You were so selfless that you often sacrificed yourself for the sake of the team. You played in wings, center mid and attacking mid just to make up the weak areas of the team. You were such a team player. Never selfish. It was a pleasure to see you play. Every minute.

I never thought that this day would come to bid you farewell from Manchester United. I always wanted you, Wazza, to retire at United and used to think that you would go on till the late thirties (at United). But, not everything goes the way we want. I was 13 when you came to the Theatre of Dreams and 13 years later, I feel that my childhood is over. My childhood hero is gone. My best player is gone. It would be a shame to see you in non-United color. Dear Wayne, blue does not suit you at all. Not one bit. And it would be odd to see that legendary no. 10 Red Shirt worn by another player, no matter how high profile he is. How I wish you were still a Red Devil.

When I think of United, I think of you Wayne. And it will take some time for me to accept that you are gone. Every time we conceded, I searched for you to rescue us. I was always so sure that you would take us out of such situations and guide us to glory. And you did. You won us so many matches and trophies. I have habituated to that for 13 years Wayne. I know, when United concedes, I will still search for you but you won’t be there. How painful will that be? Goals of all sorts viz. acrobatic, tap ins, headers, long-range, free-kicks, volleys, penalties and sublime chips will be missed. As selfless as you were, I will miss all the assists too and not to forget, those Paul Scholes-esque diagonal balls and vision. Not to mention the passion for the game.

You came into a team full of talented players and legends of the game. But you fit so perfectly like a missing puzzle. You came and you conquered; broke a number of records and wrote your name in the history books. I feel sorry for the youngsters who never got to see you play. Wayne Rooney from 2004 to 2012 was an absolute joy to watch and was a world winner. Your charisma, passion, hunger, and selflessness for the game made me love you instantly and boy, it was never over. I kept adoring you, making you the synonym of Manchester United. Your stats prove that you never disappointed.

Countless strikers came and departed the club but you remained. You were not perfect, you had your moments that proved you were human. You erred. But you covered those moments with your brilliance, repaying the fans with what they wanted from you. You delivered. And that explains your character. When you wereon the field, it never felt like you were giving any less than 100%. Instead, you gave more. One more aspect I love about your game was you tracking back to win the ball from the opponent. You, a striker, was seen defending and within a flash, you were there counter-attacking and scoring a belter. At times, it was like seeing countless Rooneys on the same field at the same time. That was a joy to watch Wayne. But there is only one Rooney. And you are off to Everton. I will miss that particular passionate player on the field in a red shirt.

253 goals for Manchester United will stand tall for years to come. And perhaps, no one will break that record in the modern era of football where loyalty is rare. And that is what makes you a legend and like Ander Herrera mentioned I will gladly tell my grandchildren about you Wazza. In an era of (arguably) the two greatest of all time, Messi and Ronaldo, I will not let the story of certain Wayne Mark Rooney die. For what you did for United is no less and your name will forever be in Golden letters in the history of Manchester United. ‘Remember the name, Wayne Rooney’, Clive Tyldesley said when you broke into world football making waves as you scored that screamer against Arsenal in a blue shirt. No wonder, the world will remember your name for years as the (arguably) greatest Manchester United player.

As your big fan, I wish you all the very best for your future Rooney. You are still just 31 and can play around 5 years more (though you have got only 2 years’ of contract at Everton, I hope it gets extended). During this time, I wish you score more goals and break another record that Alan Shearer holds. May you be the top scorer of Premier League too and also break into the England team. I hope you get selected for the World Cup team and score more goals for England, stretching the record far.

Before I stop writing, I would like to thank you, Wayne, for making me love this sport and for countless memories. I will never forget your goals and assists, your moments of magic and the inspiration that you injected in us through your play. Thank you for 13 superb years and 16 trophies. While you were here, you as a player won everything that could be won. What a great career you had, Wazza. But it’s time to part ways. Adios Captain. You came as a kid and left as a Legend. All the best for the future and yes, I would like to see you back in Old Trafford after you hang up your boots. Lastly, I would like to describe you in short borrowing a Martin Tyler quote here:

Farewell Legend. It’s an end of an era. You have been a great servant of the club.

And now, my 10 favorite goals that Wayne Rooney scored as a RED DEVIL.

10. What better than the debut goals to start with? I pick not one but all his 3 goals in this position. Hat-trick in a debut match in a European competition as a Red Devil. Wayne Rooney, You beauty!

9. This goal is special, as this was his first against the Scousers and I loved the long range goal. Goal vs Liverpool is always so special

8.  That chip goal against Pompey in FA Cup was genius.  Always in love with that goal. Shows the technical ability of Rooney. Brilliant.
7. What a counter attack from the deadly duo… Ronnie and Rooney and what a sublime finish by Wayne Rooney…
6. This goal vs Arsenal is what a typical Rooney does… Behold his run, his passion, undying hunger for the goal. And, not to forget his deadly finishing. This is perfect. (Just fast forward to 1:55 for the goal. I could not find the individual video)
5. The Champions’ League final goal vs Barca… He scored but United lost. (fast forward to 1:16)
4. The record-breaking goal via Freekick vs Stoke. What a goal that was to score the 250th goal for United surpassing the legendary Sir Bobby Charlton.
3. The half way line volley from Rooney. Watch and adore…
2. Did we talk about volley? What better volley than this? An angry Rooney. A typical aggressive Wayne Rooney finishes a wonderful volley of all time.
1.  Rooney… Oh, wonderful.. what a goal.. at what a time.. in what a place.. what a player… Wayne Rooney.. out of this world…
the same video with better video resolution

That acrobatic finish against Villa

FFS, There are far too many special goals and I am getting too emotional, let’s watch his 250 goals for United together…

Read More From The Author