Emotions were all over the pitch. Our supporters had just witnessed the 109 minutes of the roller coaster and were about to be indulged in another nerve wrecking minute as the referee blow the whistle for the foul on Satish Tripathi inside the D-area box. This was a crucial moment of the match as Sitanshu steps up to take the penalty.

FC dead runners had a flying start with a good control of the ball and keeping the opponents to play deep in their own field with four solid defenders. But, it only took 19th minutes for Prakash Poudel to score the first goal for FC Dead Runners. As the pressing game continued, Manish came from the bench with his dribbling skills and running past defenders on the right flank. The moment was ceased perfectly as he crosses the beautiful ball to the far left where Gyve controls and scores; which gave a 2-1 lead to FC Dead Runners before the break.

After the break, the game took a fast momentum when Rohit equalized for Everest and immediately scored another to take a lead of 3-2 in the game. FC dead runners never gave up the hope and continued playing the possessive game which they are good at. It’s the super-sub of the day Mr. Pawan Panta that scored immediately after coming from the bench and made it 3-3. Opponent takes the lead again from a good free-kick goal and was up by 4-3 with only about 5 minutes left in the game.

Sitanshu, who was clearly the man of the match for the day steps up to take the penalty. As Sitanshu slides the ball slowly under the goal-keeper from the spot, the crowd burst in cheers & screams of joy were visible in each of them. Don’t believe me? Let the below picture of Utsab speaks for itself on how joyful the moment was. 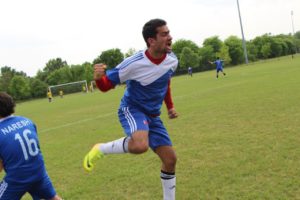 And, this concluded the full time game at 4-4 & this wasn’t the only heart-breaking moment of this final. “One of the truly amazing final I have ever seen”, said one of the supporters. The goals were coming from both sides and we were all excited for every single minute, he adds. And, now we move to even more nerve-wrecking moment as FC Dead Runners step up to take the first Penalty for the PK shootout.

Sitanshu steps up again and scores with cool spin on the ball. As Everest misses their first penalty and falls behind, Sunil from FC Dead Runners scores again and gives FC Dead Runners 2-0 lead in shootout. And, Utsab Dhunagana steps up big to save the penalty; FC dead runners were up with 2-1 lead with 5th person left to take Penalty Kick. The Coach/Player of the FC Dead Runners steps up to take the last penalty and scores to win the CUP.  “My mind just did a short trip from last year’s final to this year’s moment and I knew I had to score for myself, for the team and for the supporters”, says the Coach.

The celebration began as the players and supporters gathered in the ground and started shouting FC DEAD RUNNERS. “It was a glorious moment. We have been planning & working for this day since last year’s final. All the hard-work of the players and our team finally paid off.  I am very proud of my team”, says Captain Sanjay Dhakal.

Despite the injury and sickness faced by team, we came victorious and that’s what matters. The non-stop effort of kaka, Sunil, Puskar, Bhat, Pukar & Sitanshu in defensive line kept us alive for the whole 110 minutes. Prakash, Satish, Naresh, Sudip, Roshan, Ram, Arjun all performed very well in this tournament and became part of the victory. Some sacrifices were made but I know all players are very proud to be the part of this glorious moment says the Manager.  It was a long road to final and each member of the team has a part on this, he adds.

At the end, FC Dead Runners wants to thank everyone for their support and coming to cheer for us. We also like to thank our sponsor, NiRanjan from Hamro Automotive for showing us continuous support.  Please like us on facebook for more pictures and news and continue to support us. 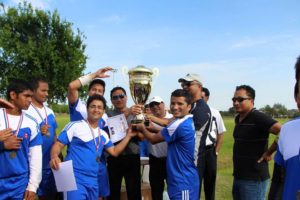 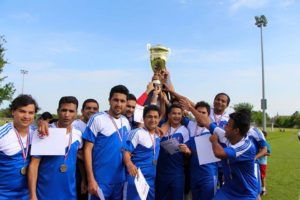 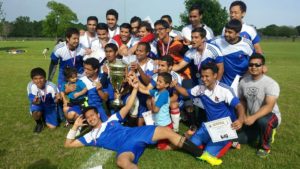