Bisket jatra is an ancient traditional jatra which is celebrated in the old and religious city Bhaktapur situated 18 km away from Kathmandu. Bisket jatra,is a jatra, which marks the end of Chaitra(march-april), last Nepali month to baisakh(april-may), beginning month of Nepali calendar, welcoming the beginning of the new year and all the upcoming prestigious moments of life.

Bisket jatra is mainly famous for “tongue piercing”, causing the festival to be celebrated with much splendor and ordeal. A volunteer from the Shrestha family gets his tongue pierced, while he is in a spiritual trance, with an iron spike. The man walks around the town shouldering a round bamboo rack with blazing torches. It is believed that successful completion of the painful ritual brings good fortune and prestige to the volunteer himself and the villagers. 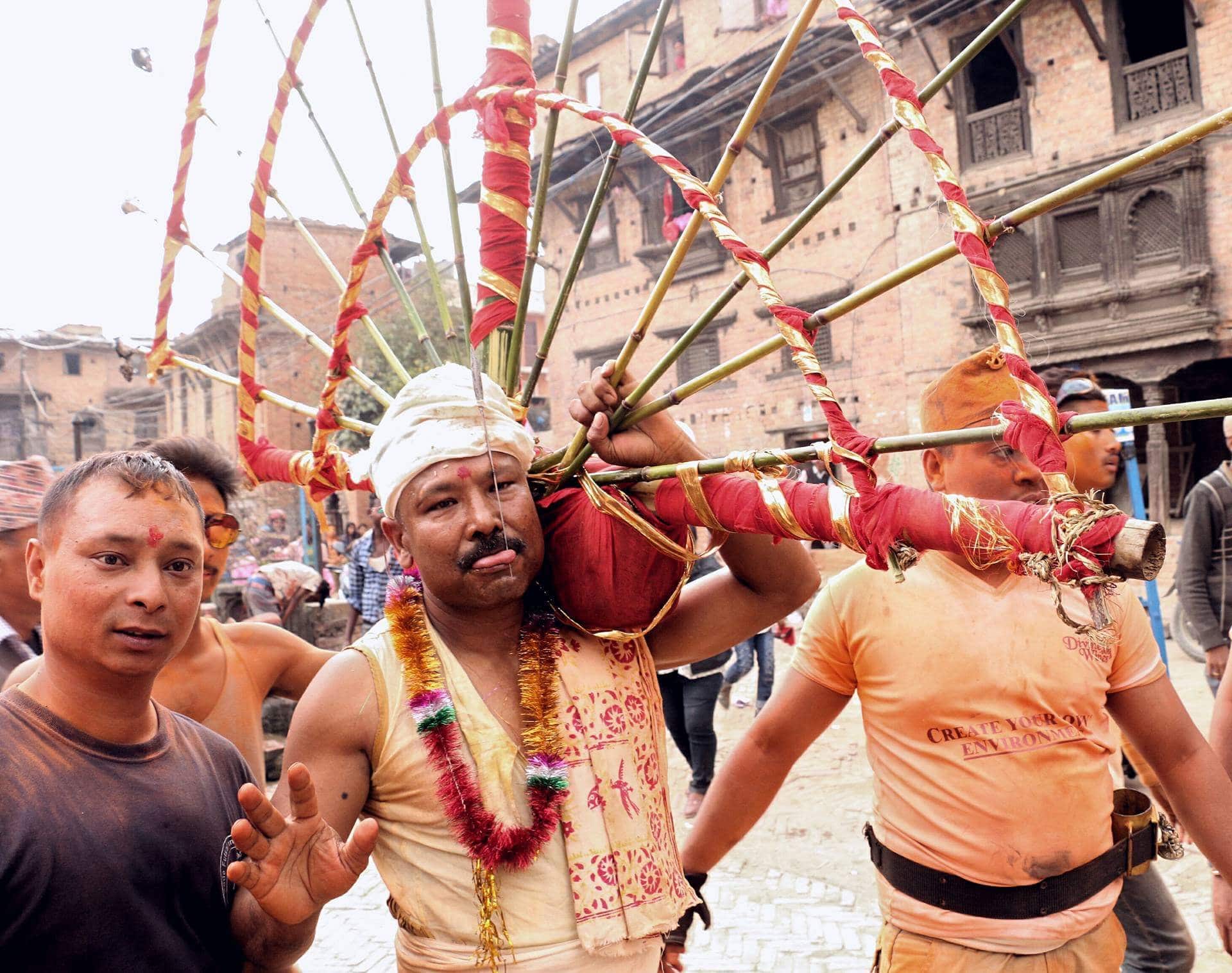 The famous festival, celebrated for eight nights and nine days, according to many records dates from the lichchhivi era (c.450-c.750). The jatra is started by worshiping the Bhairabi temple nearby paanchtale temple in naumadi.

While the festival is commenced, images of lord Ganesh, goddess Lakshmi and goddess Mahakali are carried around the town along with a chariot procession.

Bisket jatra marks a great cultural and symbolical ecstasy in Bhaktapur. Observed at the herald of spring, it is a festival of human behavior and emotions which are symbolically depicted through the multiple aspects of the festival. According to folklore, the festival began when a handsome young man bestowed with tantric powers, kills a pair of serpent.it is said that two serpents had come out of the princess’ nose when she sneezed at midnight. In the blink of an eye, the two serpents transformed into huge serpents. The young man slaughtered the serpent at the moment they attacked him.

Having found the youth alive and the serpents dead, king Bishwo Malla, then ruler of Bhaktapur began the celebration all over the city now known as bisket jatra.

The jatra is also a celebration of joining of bhairab and bhadrakali addressed as bhaila deo and nakinju ajima in the local dialect. Metallic idols of deities are taken out of the temple four days ahead of the erectoin of yoshin in separate chariots called nakinju kha and bhaila kha. The chariot is drawn voluntarily by festive people. The concept of celebrating the bisket jatra is essentially based on conjugality, creation and the continuity of life.

Two different poles are erected during the jatra, one that has two extended arms and another one that doesn’t have any.the yoshin(erected pole)without arms is erected a dai earlier than the one consisting arm, and it is put up in the potters square in the morning hours.

The yoshin with two arms is erected during the late evening on the eve of nepali new year. A huge crowd gathers up during the religious occasion singing songs of joy during the procession.

Many energetic youths, attempt to climb the yoshin using big ropes in order to get plants placed at its top. people that are able to get hold of the plants place on top of the yoshins, is believed to be able to increase his chances of siring a male child.

According to old mythical sayings, bhairab and bhadrakali are the divine male and female forms of the firmament and the earth itself, respectively. It is believed that the harmony and synchronization of made creation of life possible on our planet. The rain that showers down is considered to be the element bearing life, while earth is the ground for creation. The hole in which the yoshin is erected is called guheshwori, the female creative organ.

The pole(yoshin) is positioned perpendicularly to the sky and the earth for a day, 24 hours. The religious ceremony is accompanied by a big feast all over Bhaktapur. 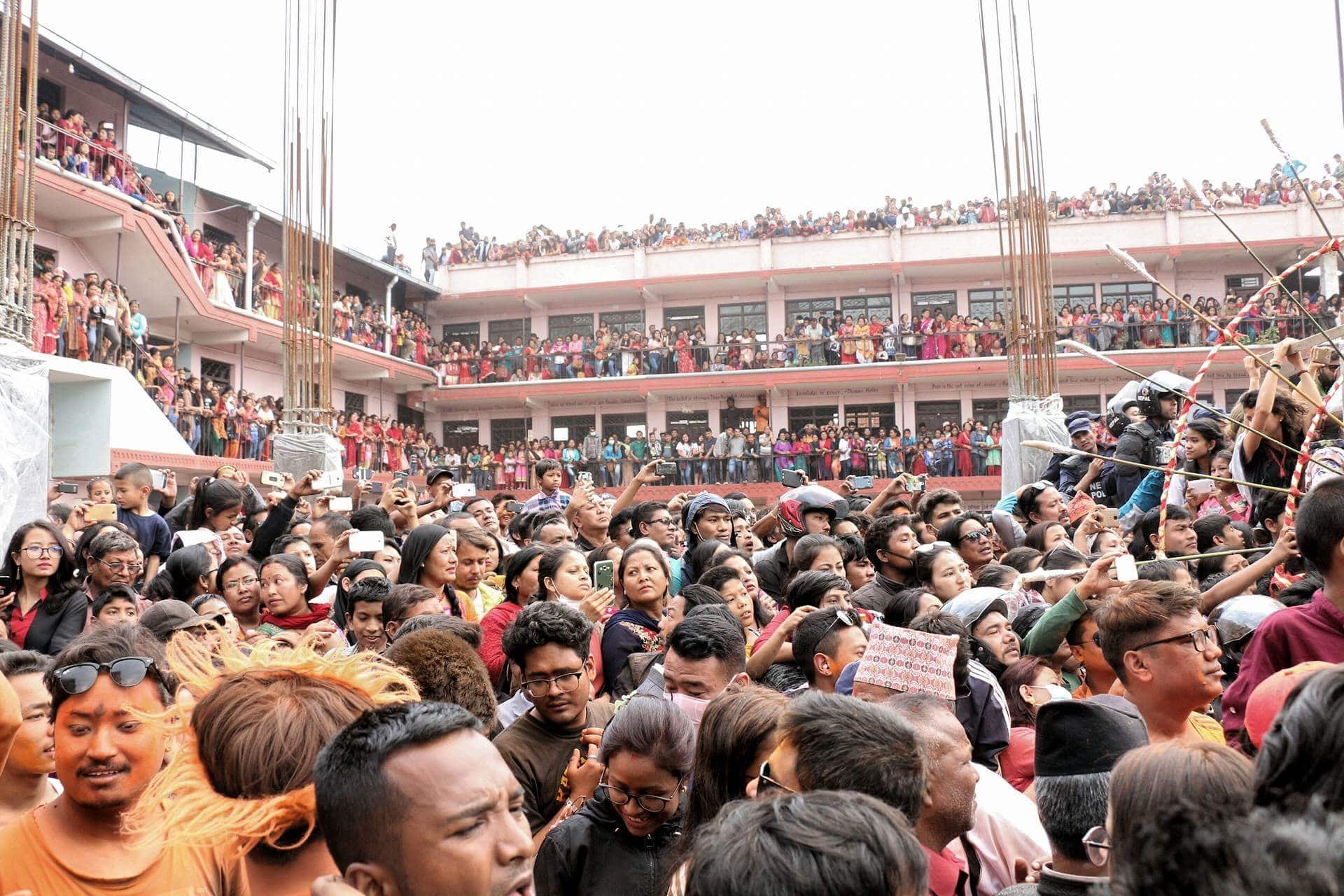 The celebration of Nepali New Year

The dawn of the new year is a prestigious, joyous, celebratory moment for all the local citizens residing in Bhaktapur. Many people assemble on the yoshin khel in the earliest of the morning, paying homage and making sacrifices of animals to bhairab and bhadrakali until mid-day. Cheerful atmosphere and the festive gala indicates the herald of new bikram sambat, new year.

The yoshin is taken down in the evening of the new year, accompanied by many tunes played with flutes, drums, cymbols,and other musical instruments along with singing every now and then.after the yoshin is laid to the ground, people gather together to pull the chariots having gods and goddess in them towards ghiti, one of the toles, situated in bhaktapur.

At midnight, the chariots containing bhairab and bhadrakali are brought together, symbolizing copulation. During this time, the chariot with bhairab doesn’t move. It’s the badrakali that keeps dashing over to bhairab with passion.

The event, indicating the advent of new year, spring and joyous moment makes it a living heritage for those that are drawn toward culture and its majestic beauty.