FC Dead Runners Houston & Everest are set to meet in the final for NAH CUP 2015 organized by Nepalese Association of Houston. The game is set to be played on April 4th, Saturday, 2015. This is the second year in a row FC Dead Runners have made it to the Final. “We are not going to repeat the last year’s result and try to secure the CUP this year,’ says the team coach.

After thrashing Three Star Sugarland 4-0, FC Dead Runners secured their spot for the semi-final. Prakash Poudel, Akarshan Khatri, Pawan Panta were among the Goal-Scorer. Pawan Panta has become the leading scorer for FC Dead Runners with 4 goals to his name so far in the tournament. So far, the club sponsor HAMRO AUTOMOTIVE (Houston) is satisfied with the progress and has agreed to provide continue support to the club’s progress in future.

Semi-Final was set for 03/29/2015 at 9 am in the Cullen Park, Katy. But, the opponent team H11 failed to show up, advancing the FC Dead Runners to the Final spot. NAH expressed the sad concern about the no-show and condemned the lack of the effort from the team. But, Sanjay Dhakal, captain of FC Dead Runners believes we should be looking forward to the secured final spot without worrying about other teams. 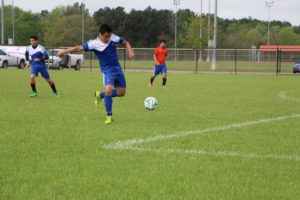 According to FC Dead Runner’s Manager, “we cannot undermine our opponents, who has come up with strong results for the first year but their lack of experience in tournament might be our advantage which we really want to exploit upon. This will be one exciting final to watch & all Nepalese in the town are invited to watch the game. The CUP ceremony will be help upon the NEPAL DAY CELEBRATION organized by NAH.