Football, as we know, is considered the most beautiful game in the world. Loved by millions of people around the globe, it is watched and played on a daily basis by almost all age groups. One such group of people who enjoy the sport and are big time football fans are the ladies of LFC Nepal. LFC Nepal is an official supporters’ club of the most successful English football club, Liverpool FC. Established in 2009 by a small group of friends with the same passion for Liverpool, the supporters’ club has come a long way today as Nepal has the 39th highest number of Liverpool fans. Among these hundreds of Reds, there are few ‘Lady Kopites’ who love the club no less than the boys.

Besides being beautiful and supporting the same football team, these ladies don’t really have much in common but that didn’t stop them from having a bond of sisterhood. Coming from different walks of lives, they had no idea that the others would be equally into the game. But now, they have their own inside jokes and even have an evenly distributed set of players they have a crush on. Thanks to an idea that struck the mind of one of them, they formed a futsal team. Futsal is played in an indoor pitch between two teams with 5 or 7 players. With a slightly different set of rules than that of football, futsal has gained popularity in Nepal in recent days. 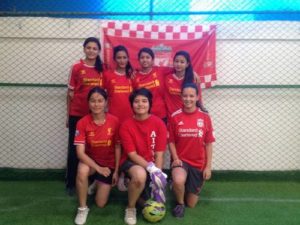 In early days, they had no idea how each of them could gel in a team and play representing the club they love. But they instantly knew that this wasn’t some onetime thing. With the help of few boys, they started their first practice on a cold winter evening. Back then they didn’t know that they’d come a long way, not just as team mates, but as a part of a really amazing supporters club. Their common love for football has made them friends and they could sit and gossip all day long not only about which player has nice hair and good body, but also about his tricks, signature moves and stats.

Had it not been for football, they would’ve been complete strangers. Helping each other to bring out their strengths and to limit their weaknesses, they found an instant bond between themselves. They rose above the stereotype beliefs and made way for girls of other supporting clubs to come out and play the game they love.