Nepal is a landlocked country in South Asia and home to the highest mountain in the world, Mount Everest. Nepal’s flag is the only non-quadrilateral national flag in the world. Our flag acts as both the state flag and the civil flag of a sovereign nation. It has been dubbed one of the best and most mathematical flag in the world. But it also has some importance and meaning. So what is the meaning of the Nepal flag?

But first to start with the history of Nepal’s flag:

The flag was first adopted after the first king of united Nepal, Prithvi Narayan Shah. He unified all small areas of Nepal. The flag’s meaning has changed and has a different meaning in this time of modernization. The designer of the Nepali flag is still unknown but it is believed the Ranas might have been designed Nepal’s flag. Nepal adopted this flag officially on December 16, 1962, and it is the only national flag in the world that is not a quadrilateral. It borrows from the original, traditional design used throughout the 19th and 20th centuries. And is a combination of the two individual pennons used by rival branches of the ruling dynasty.

Nepal’s flag consists of three colors: blue, crimson red, and white. The blue color denotes the symbol of peace and harmony, while crimson red symbolizes the color of the rhododendron (national flower of Nepal). This color also reflects the glory and bravery of our Gorkhali ancestors. The white color symbolizes the sun and the moon. The two triangles represent two major religions of the nation: Hinduism and Buddhism.

Symbol of the flag:

Nepal’s flag is shaped like two triangles denoting the symbol of the Himalayan mountains. The depiction of celestial bodies represents permanence and the hope that Nepal will last as long as the Sun and the Moon do.

As observed by the locals of the flag’s symbols is that the flag shape is believed to symbolize as a Nepali pagoda. Placing a mirror at the hoist side can generate an image of a pagoda.

How to make Nepal’s flag properly? 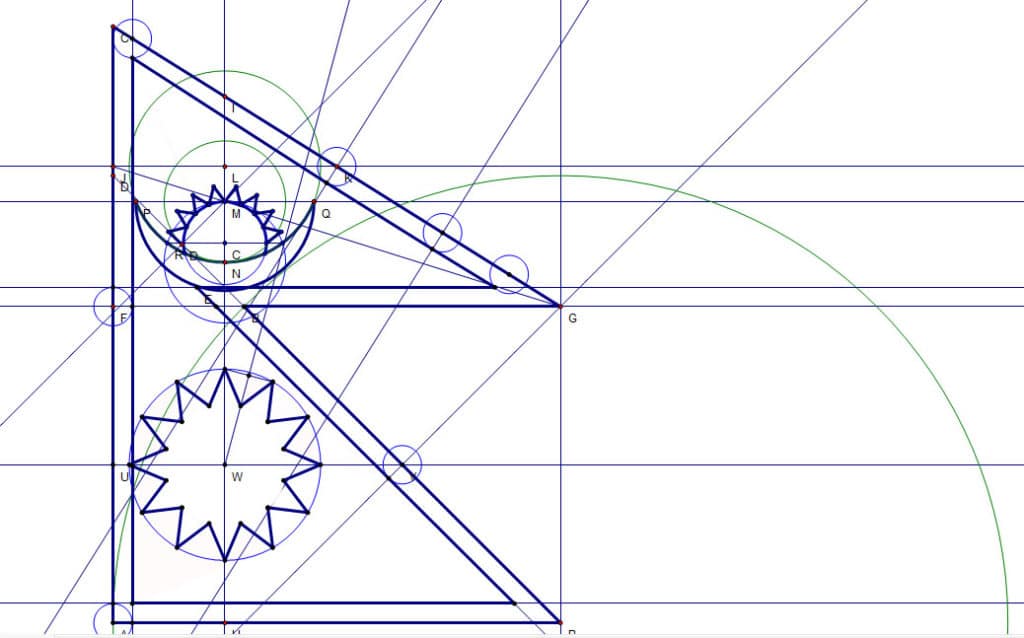 To make the national flag of Nepal, first, draw a lower portion of crimson cloth to draw a line AB of the required length from left to right. Then draw a line AC from A to AB and make AC equal to AB add one third AB. Now mark D by making line AD equal to line AB. Then join B and D. Mark off E from BD making BE equal to AB. Touching E, draw a line FG, starting from the point F on line AC, parallel to AB to right-hand-side. Then, mark FG equal to AB and join C and G.

For the method of making the Moon:

From AB mark off AH making AH equal to one-forth of line AB and starting from H draw a line HI parallel to line AC touching line CG at a point I. Then, CF at J and draw a line JK parallel to AB touching CG at points K. Let L be the point where line JK and HI cut one another. Now, join J and G. Let M be the point where line JG and HI cut one another. With center M and with a distance shortest from M to BD mark off N on the lower portion of line HI. Then Touching M and starting from O, a point on AC, draw a line from left to right parallel to AB.

Method of making the Sun:

Method of making the border:

On the other hand, if it is to be hoisted on a pole, the hole on the border on the side AC can be extended according to requirements. Explanation: The lines HI, RS, FE, ED, JG, OQ, JK, and UV are imaginary. Similarly, the external and internal circles of the sun and the other arcs except the crescent moon are also imaginary. These are not shown on the flag.