It is believed that the festival wards off evil spirits, and brings peace and prosperity in their lives. In this festival, people worship and offer sacrifices to demons, serpents and other supernatural beings as well as natural elements like wind, water, and fire since ancient times. On this day people also wear metal rings which is believed to have the power to safeguard people from all ills and evil spirits.

History and its importance 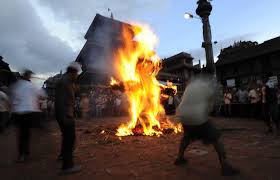 There are various legends and myths attached to the Ghantakarna devil that is revered as well as feared. According to one myth, it is said that it had a pair of bells as its ears. That’s why it bears the name ghantakarna; here ‘ghanta’ means bells and ‘karna’ means ears. It is said that its body was colorful with a combination of red, blue and black. In addition to his already scary appearance, the pair of bells used to ring every time it moved.

The demon used to terrorize villages by stealing women and children of a village. It used to ask for gifts or monetary items from the villagers and threaten them. Due to scary appearance and his nature, farmers used to be scared of him and didn’t use to go out, even in the plantation season. They were helpless and disappointed. However, one day, a large number of frogs came to the village and they began to croak near the place where the demon was staying.

Ghantakarna became angry about those frogs and tried to kill them and in doing so, he jumped into the pool. But it was unaware of the fact that the pool of water was a swamp. The demon then drowned in that swamp. The frogs swarmed around his head as he drowned to death. So in a way, the frogs saved the village and the villagers from the demon. Since that day, the people started to celebrate this festival as their victory over the evil as Gathemangal. 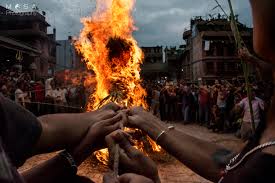 This Newari festival is usually celebrated on chaturdashi and celebrated as a drama. The legend is acted out in streets. On the day of the festival, the groups make effigies, made of hay or straw, of the demon at the crossroads They place pots of cooked rice near the effigy. Some also offer meat to the demon.

A man smears black and blue paint all over his body and roams around to collect money or offerings from the people in order to an effigy of the demon god Ghantakarna. And at the end of the day, the dummy is dragged to the nearby river bank for disposal with the painted man sitting on it.

In the evening, the locals hammer three-legged nails onto the door with religious paper charms in order to scare away the ghosts.