Off Season trekking…6 Trekkers. A Story! It was mid of February and 6 of us decided to trek to Panch Pokhari. From the very start of our trip, we were not getting positive signs. A local was reportedly killed by a bus at Piple, Kavre , and hence the highway was jammed. We reached Melamchi, late at 7:30 PM, far behind schedule and had our first night stay there.  The second day, we moved to Bhotang via bus again. The actual trek started from Day 3.

Locals had been commenting that there had not been good rainfall or snowfall this year. But the rain did decide to pour as we reached Melamchi.  February rain! On the second day, when we reached up to Deurali, the rainfall was very intense and it rained throughout the night. Like cat and dogs, cold and bitter! We were upset that we wouldn’t be able to make it to PanchPokhari.  The villagers responded in the same way.  “No one visits here in this season, “they would say. We asked the villagers for a guide but no avail. But we didn’t lose hope and started trekking.

We had carried some dry foods and chocolates; sleeping bags assuming there would be no lodges or facilities on the way and we had to survive for 2 days, on our own. We were prepared but the only halfway. Because we didn’t have tents nor were our shoes good.  As we started trekking, we walked through the white forest, which was so exciting. Forest covered in snow as if the whole world was squeezed out of all colors and turned white! We walked through narrow, steep up and down trails across the rivers and reached Tapkharka. The snow was nearly 2 inches thick. After Tapkharkha (3260 m asl) the weather changed; worsened and snowfall started. The walk then got difficult.

Due to snowfall, we were confused about the trail. The lack of signage made it worse. Maybe this was one of the unexplored trekking routes.  The snowfall worsened and was 6 inches thick.  As we were not fully prepared, with warm clothes; we had to wrap our legs (and even body) with plastics to prevent snow bite. We did have garlic soup prior trekking to prevent altitude sickness, but due to continuous snowfall, the condition was harsh. Yet, in all this harsh whiteness, there was no place to take rest, as all was covered in thick white snow. So, we had to keep going. 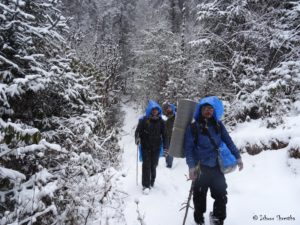 Our fortune shone, as we saw a house at Nhesempati, 3631m asl. We were delighted, but it was locked. The snow was thick and falling and falling. We had no option but to stay there. Hence, we reluctantly broke the door of the house and entered. It turned out to be a seasonal lodge, closed and locked in this offseason. Inside, luckily for us, there were some utensils; few packets of noodles and some firewood’s too. So we melted some snow; made some noodle soups and ate it happily to keep our body warm along with some foods we had taken.  We planned to walk again and reach our destination Panch Pokhari. It was already 4: oo PM then .

The difficult part of trek started then. Two of our friends weren’t feeling good and stayed behind; while the remaining 4 of us marched to our destination: Panchpokhari. After a half hour of walk, we saw a road sign that said 4.3 km to reach PanchPokhari. We were very thrilled, relieved and happy at the same time; no matter what we had to reach Panch Pokhari. So we kept on walking in the narrow trail, with the thick snow; snow as thick as 1feet. We were feeling like; it was some mountain we were climbing.  One wrong step and death would cradle us. So, we had to walk slowly, and there was no further signage. We had to climb more 400 m asl from the lodge we left to reach Panchpokhari but the trail was not so steep up.

Still, we kept moving. Then the darkness hovered around light, and the difficulty got even more difficult; as if the prior difficulty was a mere mimicry. And our half preparedness, alas, we had only a few dim torchlights and flashlight from a cell phone in the lingering darkness. We could not return back to lodge; we had come far and the previous signage showed harshed out already-too-harsh.

Confusion, darkness, and snowfall prevailed! We kept moving and moving. Snowfall led to storms. Our body legs were freezing and so did the water we carried in the bottle.  We were thirsty, cold, tired and unable to communicate with each other. Snow kept falling and visibility was terribly poor. The watch showed 8 pm and we had no clue where PanchPokhari was. Maps? Our half-preparedness again! Then slowly lights were blinking through the nearby hilltops, which was from the village nearby Panch Pokhari! It further meant that we had crossed Panch pokhari on the way and missed it already!

Thanks to the blinding, snow! Now, we were in the crunch. Heavy snowfall and having passed our destination, we needed shelter and rest! Some warmth and food too! I thought of staying in a cave that night, we had spotted a few on the way. But it was too risky. The snow had seeped in through them, and if we stayed there, we would be frozen in the morning! Trekker-Kulfis all of us!  We had to return to the lodge, if we wanted to remain alive, anyhow. 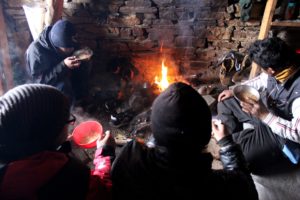 The storm got more dreadful. But we didn’t lose hope and kept on moving. One step at a time, in the deep snow; so deep that our previous footsteps had already vanished! Confusing trails again! We weren’t confident at all! This way or that way; which way? We had doubts every 100 m. Frustrated and cold, but we didn’t let the bitterness get to our hearts. We never knew we were so religious before, but to keep our spirits high, we were chanting “Jai Sambho” and “Jai Bhole”. We did not lose hope. Survival became our priority, the lodge became our sanctuary and we kept moving to reach the lodge.  Snowfall, darkness, occasional “Jai sambhoo” chant and a step further!

And Bravo! We reached lodge at 11:00 PM. Now we were saved, now we would return back home alive! Prayers to God, Jai Sambhoo!  Happiness tears fell on the snow. Saved! Safely back to the lodge!

Author: Krishna Dev Hengaju (Our author, a passionate traveler,  is vice-chairman at Youth Alliance for Environment.)