Nepal is secular nation but there are majority of Hindu devotees. After that, Buddhism is the second-most followed religion in Nepal. Kapibastu of Nepal is the birth place of Siddhartha Gautam or Lord Gautam Buddha. Being home to Buddha, Nepal consists of many Buddhist temples and stupas that are flocked by Buddhist followers and tourists from all over the world alike. Here are 5 famous Buddhist temples in Kathmandu, that you should visit.

Swayamnhunath Stupa is one of the ancient architectures in the Kathmandu Valley. This ancient Buddhist temple sits on the hillock of the Valley. This glorious Stupa is most admired for the panoramic views of the city.

This landmark consists a stupa, some shrines and temples. It is believed that they were built during the Licchavi period. This architectural marvel has a white dome at the base which signifies our planet Earth. It has a tower-like structure on top which represents the 13 stages of Nirvana (or enlightenment). In the structure, you can also see Budhha’s eyes painted and ‘Pancha Buddha’s carved on all four of its sides. And if you go around the Stupa, you will also see idols of Buddha in the dome.

Bouddhanath Bouddhanath stupa is located in the northeastern outskirts of Kathmandu. This Stupa’s architecture is very similar to that of Swayambhunath. It also has a white-washed dome at the base and a tower with Buddha’s eyes. The Stupa has tiers of an outstretched compound where people can go in rounds. You can also go around the Stupa at ground level.

Kopan monastery is one of the important Buddhist temples in Kathmandu which is situated on the top of Kopan hill. This Tibetan Buddhist monastery is located near Boudhanath, on the outskirts of Kathmandu. Kopan monastery today is home to over 300 Tibetan Buddhist monks and over 300 nuns. This magnificent temple also offers you with a panoramic view of the town with Bouddhanath Stupa below and the spectacular Himalayan mountain range above.

This monastery was founded in 1969 by Lamas Thubten Yeshe and Thubten Zopa Rinpoche, who were the founders of Foundation for the Preservation of the Mahayana Tradition. The first temple was constructed in 1971/2. The name of this Monastery comes from the hill it is built. It is also believed that it was once home of the astrologer to the king of Nepal.

Namobuddha is one of the important pilgrim sites in the Valley, especially for Tibetan Buddhists. This pilgrimage site lies about 40 km from the Boudhanath Stupa, southeast of Kathmandu. This site is a place of holy pilgrimage for people from all over the world. It is equally famous among devotees in the East and the West.

According to an old legend, it is said that Prince Mahasatwo offered his life to a hungry tigress, who had just given birth and was exhausted. The tigress left his bones that were later put in a tomb and placed where the present Namo Buddha Stupa stands. This is where, millennia later, Buddha realized he was the reincarnation of Prince Mahasatwo. 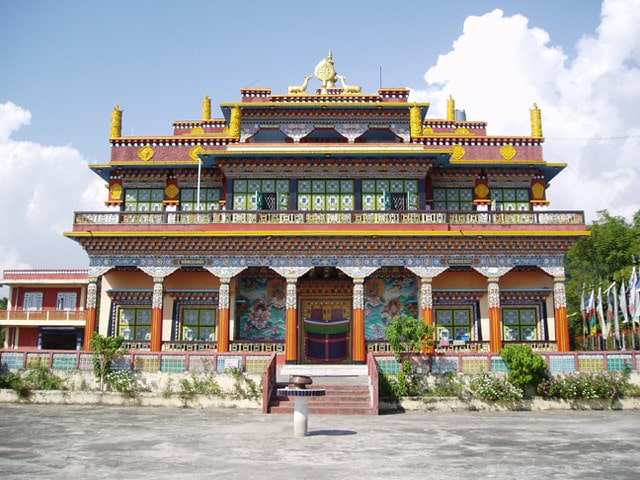 White Monastery, famously known as Seto Gumba, is a Buddhist monastery in Nepal. This religious site is located in the Nagarjun Municipality of Kathmandu District, which lies outside the Ring Road. This place is home to the rich Tibetan culture and architecture.

When it comes to the White monastery, this place is famous and tourists from Kathmandu as well as Buddhist pilgrims from all over the world visit it. The environment of this place is silent and serene with lush surroundings. You can enjoy the scenic view including mountain ranges and that of Kathmandu. And you can also enjoy beautiful sunrise and sunset from its viewpoint.

These were only 5 of the famous Buddhist temples in Kathmandu. There are many more sites that have Buddhist stupas and temples. Indeed, the best way to visit them is to explore the city. If you have visited any Buddhist temple then let us know in the comment section below.