Teej is traditionally dedicated to the Goddess Parvati, remembering her union with Lord Shiva. This festival is celebrated praying for the long health of one’s family. The three-day-long celebration combines splendid feasts as well as rigid fasting. This festival also welcomes and celebrates the arrival of monsoon after a season of summer heat. In Teej, women are clad in red, yellow, and green sarees and kurtas, and they visit nearby Shiva Temple, where they sing and dance.

Teej is dedicated to Goddess Parvati. It is celebrated to commemorate her union with her husband Lord Shiva. According to the legend, Goddess Parvati had to go through severe penance and had to reincarnate several times on the earth to finally unite with Siva. It is believed that on Teej, Goddess Parvati came to Lord Shiva’s abode, and there the universe witnessed the reunion of husband and wife.

The festival is celebrated by women for the well-being of their spouses and family. For the long lives of her husband, and long and firm relationships between them in this life and all the lives to come. It is also believed that Teej purifies one’s body and soul. The festival is a three-day-long and the women do extreme fasting.

How is Teej celebrated? 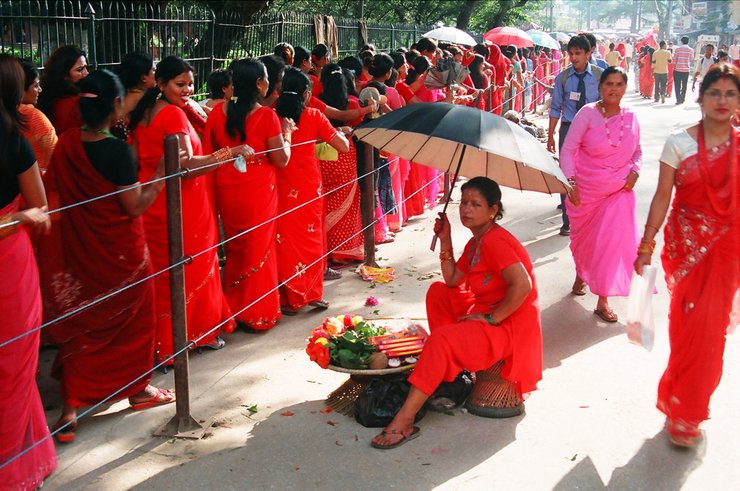 On Haritalika Teej, women of different ages, especially married women, take a fast. Some fast without even a drop of water, while others consume some liquid or fruits. Married women strictly follow the tradition of fasting in a belief that their devotion to God will be blessed with longevity, peace, and prosperity of their husband and family. While unmarried women observe with the hope of being blessed with a good husband.

Married women, on this day, specifically dress in red. They were various jewelry including chadke tilahari, laganko pote, and natthi. Then they visit a nearby Lord Shiva’s temple singing and dancing till midnight. In Nepal, many devotees mainly visit the Pashupatinath Temple. In the temple, they offer their prayers with flowers, sweets, and coins. Women dance to folk music and Teej songs, in the Temple premises, and in gatherings. Such traditions and culture add flavor to traditional values of Teej. It is among the popular festivals of Nepal and one of the biggest celebrations we can see. They end their fasting by praying to Shiva and eating something.