A day before Teej, a special festival celebrated by women of the Hindu culture community,  they observe another culture known as dar khane din. This occasion generally lies in the Nepali month of Bhadra or August/September. On this day, women who are to take fast on the day of Teej eat a heavy, healthy food to have the energy to fast.

Dar khane din is the first day of Hartalika Teej where women enjoy good food and a good time. On this day, women gather in a place, with friends and family. During this event, women organize a grand feast. Women dance and sing devotional songs. The unusual fact about this day is that the feast is to be organized by the men.

Women work hard throughout the year. But on this day, they are given a day off to enjoy themselves. They adorn themselves with the dress and makeup (sorha singaar). And before the night falls, women eat kheer (rice pudding) and drink mishri kanta. The food that is served is supposed to be rich and abundant. The next day, they take a fast till the evening and break it after a Shiva puja, under the guidance of a Brahman (priest).

The modern trend  for this culture in Nepal: 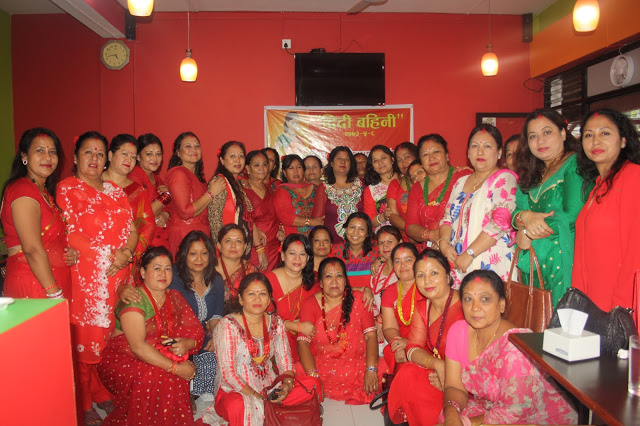 Traditionally, dar was meant to be eaten just a day before the grand festival of Teej. But such days are gone. Today, women start celebrating dar a month before, and they celebrate it in a very grand way.

People today spend a huge amount of money to go organize a dar party on. They go to the restaurant for the whole month and eat heavy, which is very hazardous for health. And the worst part is that many people don’t even limit themselves, neither in what they eat nor what they spend. People wear expensive saris and dresses, wear heavy gold jewelry, wear heavy makeup.

What they eat in the present day has also changed. Women now cut cake instead of kheer, and drink whiskey and wine instead of mishri kanta. The dar khane din has become a platform for fashion and showoff instead of cultural celebration and togetherness. In fact, the day has become like the occasion for women to show off, compete, and win, similar to any pageant.

Traditionally, this is the only day when women were fully allowed to express themselves. Women would express themselves through various songs about pain and trouble, and dance to that. But with the advancement in communication and modernization, women, in the present time, use their voice to raise concerns and social issues women are facing.