‘When the wrong ones leave, the right things start happening.’
The men’s football team once again proved that the right amount of determination and the will to win can take you to the top. After a nail-biting 90 minutes of football, Nepal won the SAG gold medal in football after 23 years by beating neighboring rival India in their own home ground. A noteworthy free kick from Prakash and a winning goal from our favorite goal machine Nawayug sealed the golds for Nepal.

Even though they started off shaky and gave away a penalty in the first half, they did not settle back. The 2nd half was all about Nepal as Prakash’s 65th-minute goal lifted the team’s morale. Alan Johnson, the head coach of India said, “It was a world class free kick. No keeper in the world could have stopped that.”

The Nepali football fans hadn’t even got back their breaths after Prakash’s equalizer when Nawayug’s goal gave them another reason to scream and cheer. But amidst all the celebrations and cheering, a special person deserves an equal amount of respect for the win and he is Raju Shakya, the head coach of Nepal. He led the team not just as a good coach but his experiences also paid off as he is the most capped Nepali football player ever. A former captain and a two times SAG gold medalist, it was his team who won the goal medal once again after more than two decades.

So, a big thank you to everyone involved in bringing back the smiles in Nepalese through the most beautiful game in the world. 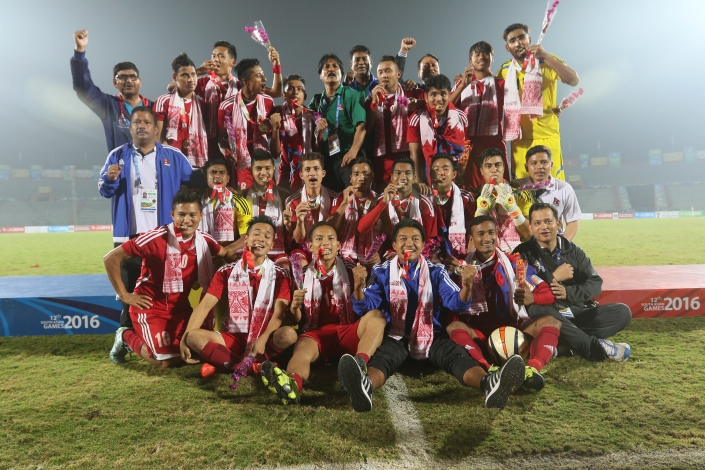