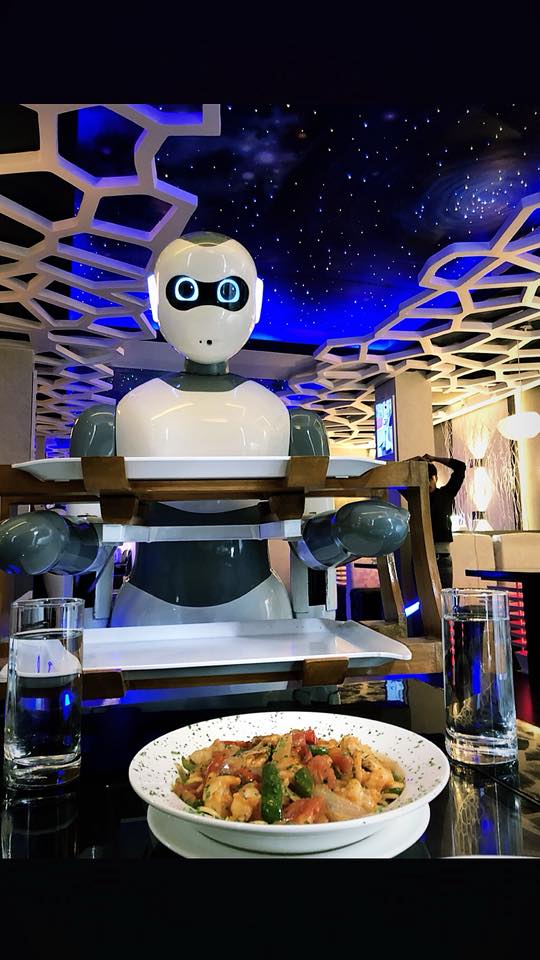 Introducing itself as a fully-digitized restaurant, Naulo in Durbarmarg today opened its gates for all the foodies in town. But the star of the show was definitely Ginger, a Nepal-made waiter robot by Paaila Technology, serving food to customers.

Everyone seemed to be in awe of this human-like robot working like humans, alongside them. Any dream to live alongside robots seems to be in our futuristic, distant future. But, restaurants like Naulo seems to be making just the right stride towards innovation in robotics and artificial intelligence and that dream.

You might say KKFC already introduced a similar waiter-robot serving food months ago. So, what makes Ginger any different?

The prime difference is that Ginger was made from scratch in Nepal. And as the developers put it, actual ‘blood and sweat’ coupled with many sleepless nights have gone to turn idea of Ginger into reality.

Ginger is an automated robot that uses Swarm Intelligence technology to communicate and operate within the restaurant efficiently. You will see three robots inside the restaurant; all three coordinate with the kitchen staff to deliver the orders.

Ginger comes to your table, as assigned, and delivers. To see Ginger tracking if the food is taken out or not just by looking down at the food will also amaze you. Once confirmed, her greeting you to ‘enjoy the meal’ before heading back to work leaves you with a smile too.

They move around the space mainly using autonomous navigation with help of magnetic strip navigation technology. They are also capable of sensing any obstruction on their way and ask for excuse to go around. At present they converse in English, but soon they will also speak in Nepali. When not in use, they all return back to their docking station.

Here’s a short video that Paaila’s team put together:

Not only Ginger but the whole restaurant is a result of their vision and hard work. The team has invested designing and putting together the interiors as well. It has twinkling stars, moons, planets and galaxies painted across the ceiling; making you the feel like you’re in space. And with everything digital around, you will feel like you are in some sci-fi movie; which is what the Paaila team wanted to execute.

Each table has individual digital menu board, which means no waiting for the waiter. The table is connected straight to the kitchen and once your order is ready, Ginger comes to your table.

One can swipe through the plethora of dishes, and order food in just simple steps. Talking about menu, they have the usual soup & salad to momo & burgers, and also Indian and Continental with a list of their fusion dishes. Dishes to look out for are Four Cheese Pasta and Jambalaya (Must Try!). They also have a range of beverages and deserts.

But that’s not all. You will also see another robot roaming around the restaurant. Ferry is a robot, similar to Ginger, serving water and glasses while you wait for your food. It’s like the icing on a cake. Ferry was also made from scratch and has same navigation system.

But Ginger and Ferry are not the only robots introduced by Paaila Technology.

Paaila Technology is the brainchild of six people—Binay Raut, Dipkamal Bhusal, Niraj Basnet, Rabin Giri, Sagar Shrestha and Wasim Akram Khan. Their vision was to bring revolution in the automation and robotics sector. Their journey started on December 12, 2016, from the Robotics Club of Pulchowk Engineering Campus (PEC). However, they got a kick-start professionally when Nepal SBI sought them to create a robot to cater its one-stop digital banking solution in Nepal.

Hence, the company came in limelight when they launched Pari on July 7, 2017, coinciding with the launch of Nepal SBI InTouch, in Durbarmarg. Pari is a stationary robot that greets customers and helps in making transactions as well as answers queries. They also recently launched Pari V 2.0 on the occasion of Nepal SBI Bank’s 25th anniversary on July 8, 2018.

The whole team is young and enthusiast to take Nepali automation and robotics sector forward. They also have plans to take their innovations international but, first they want to conquer the national boundaries.

No one knows for certain if or how our dream to cohabit with robot will pan out. But we are surely taking one little step at a time. And companies like Paaila with innovations like Pari and Ginger are huge steps for a country like ours where we are so dependent in import of everything.