On December 11, 2019, a storytelling session was held in Rashtriya Sabha Griha where Dr. Ghana Shyam Gurung, Sheren Shrestha, and Samundra Subba – three of dynamic Nepali conservationists of WWF Nepal shared their hardworking journey of working in the mountains with snow leopards. The storytelling session was part of the 17th edition of the Kathmandu International Mountain Film Festival (KIMFF 2019).

Organized on the occasion of International Mountain Day, the three eminent speakers shared their tough yet gratitude-filled journey of working in the mountains, vying for the conservation of the elusive beauty of the mountains – the Snow Leopard. The session ignited the audience’s spirit with the breathtaking stories of living with the snow leopard, in their habitats. 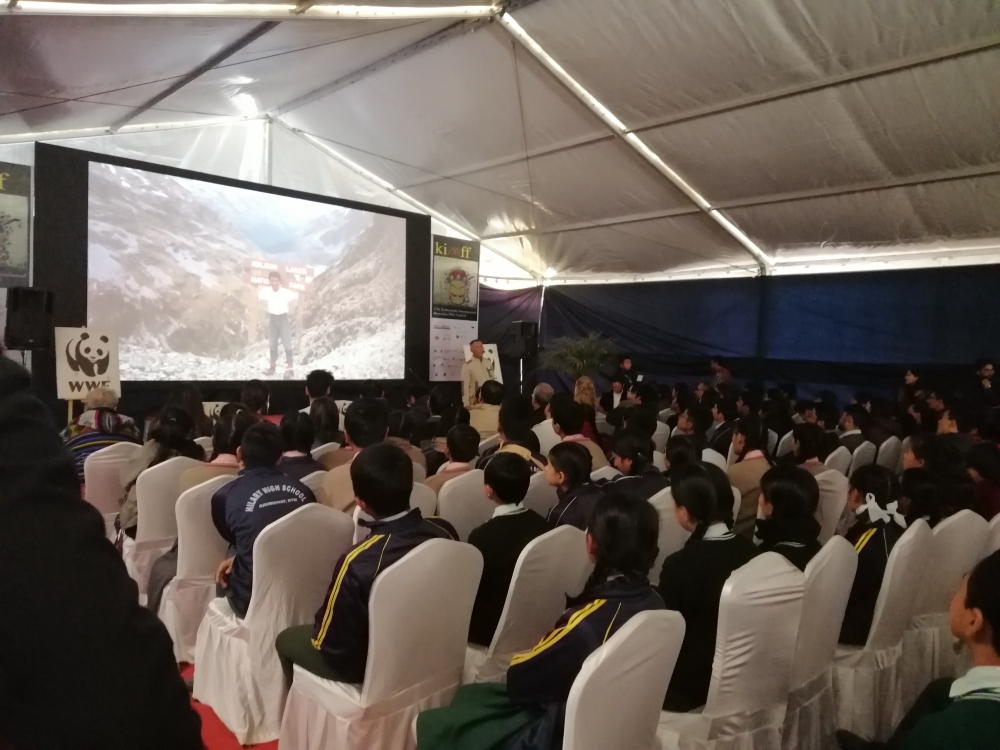 Students attending a storytelling session held by WWF Nepal shared their journey of three Nepali conservationists working in the mountains with snow leopards. The storytelling session was part of the KIMFF 2019, held at Rashtriya Sabha Griha, on December 11, 2019. Photo: Sujata Shrestha

Being a conservationist of snow leopards

“A local herder from Mustang, walked for hours to school, moved to another district to give his SLC, that’s me. As a little herder, I always thought of snow leopards as enemy who attacked and killed my livestock. While applying for higher studies in New Zealand, I was asked why I deserved the scholarship. And that question helped me gain perspective, as I knew for sure that after completing my degree in New Zealand, I wanted to come back and discuss my learnings with the herders and communities. I really wanted to merge the scientific knowledge with local knowledge and find a solution to the leopards. That’s also how I got the scholarship to study in New Zealand.

There I got to learn that snow leopards are elusive species. Furthermore, I came to know that globally it was found in 12 countries only. I felt a sense of compassion for it. That was when I thought it was the time to convert my enemy into a friend and do my best protecting it,” shared Ghana Shyam Gurung.

“We selected Bhijer for our collaring expedition after doing a survey about the snow leopards presence. We hid the traps on the ground, maintaining its natural state. After the placement of 24 traps in 50 sq.km area, all we could do was wait,” said Subba. 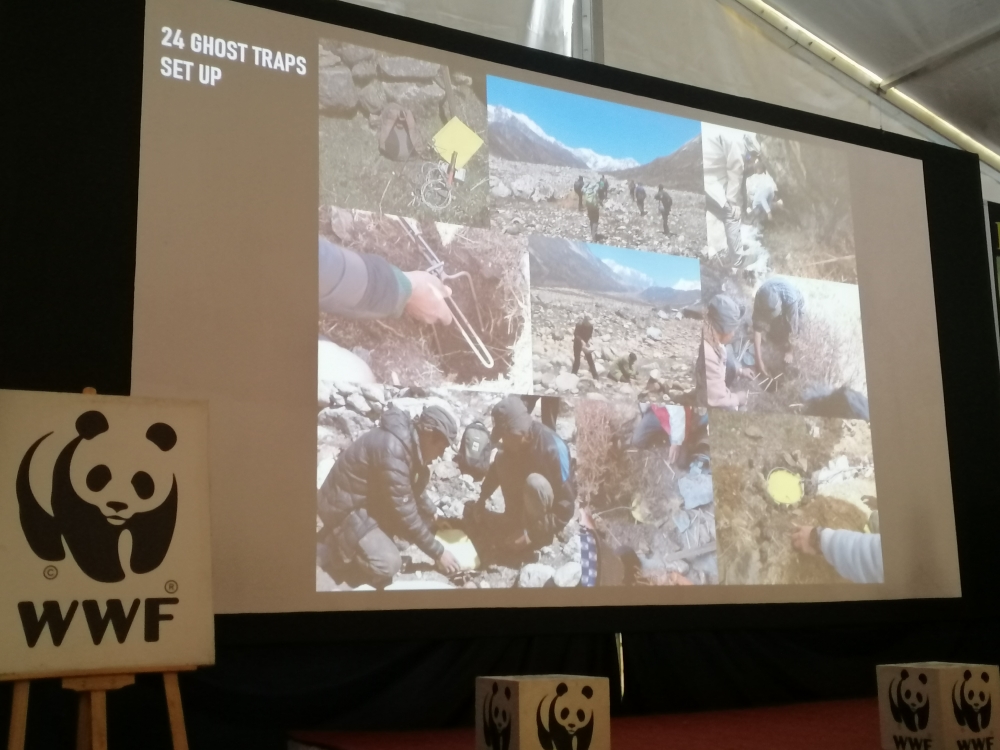 “Till 15 days, we got information about yaks being in the traps, while red fox and martens destroyed some. The worst cases were when snow leopard walked just beside the trap. After a lot of anxious waiting game, finally on the 16th day, we got information about snow leopards in the traps. We rushed to the site and, with the veterinarian’s help with the correct dose of medicine, the darting team shot the captured snow leopard to make it unconscious.

After 5-10 minutes, it became unconscious. We then safely carried it on a stretcher; we collared it and did the measurements including its weight, dimensions, pulse rate, respiration rate, and oxygen level. After the doctor confirmed that it was safe to release it, we injected the antidote to it and then released it,” he reported.

“Till now I have never seen a snow leopard in the wild. I have only seen them after they were captured. But every time I see them, I realize why do I do the work that I do,” he concluded.

Challenges of the expeditions

Then, Sheren Shrestha shed light on the challenges of such difficult expeditions. He shared, “When you are dealing with snow leopards, a protected species globally, you cannot just go and capture them without necessary permits and preparations. We spent a month in the field, preceded by months or even a year of preparations.”

“It takes a significant time to collect the research equipment, build a team of researchers, agencies and government officials involved and engaged in a lot of different capacities. The place where snow leopards reside has a remote landscape. Reaching that place alone took us seven days. One of the huge and unavoidable challenges was the weather. We had only read about climate change but up in the mountains, you actually experience it. There was heavy snowfall at erratic times that made work more difficult.” 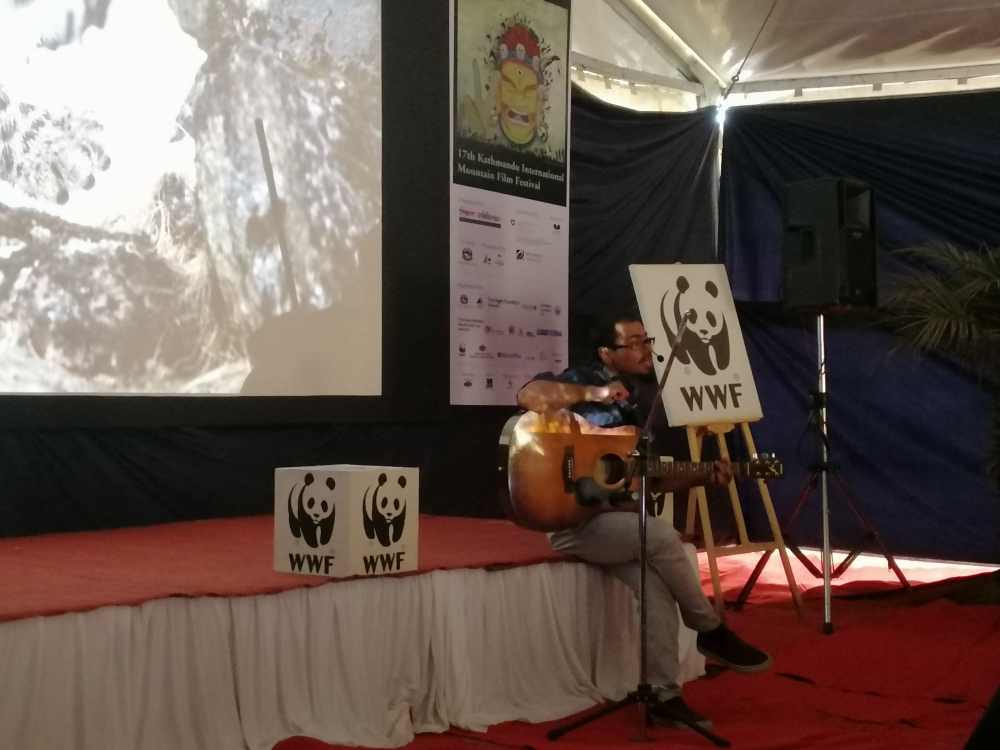 Sheren Shrestha, Senior Research Officer at WWF Nepal, singing a song about the ghost of the mountains-snow leopards after their presentation. Photo: Sujata Shrestha

He further shared how they interacted with the locals. “Some would share their problems about snow leopard killing their cattle. We listened to all as we needed to solve their problems to ensure that they continue saving the snow leopards. As it’s the locals, not the outsiders, who have been saving them so far, and for a long time.”

“Without the support of citizen scientists, it is not possible for us to do what we do, neither reaching the landscape nor putting all the traps. So, we are just trying to help them with our funds. In addition, they also have practical knowledge of the snow leopard movements. Their knowledge becomes very critical for us. We blend their knowledge with the science that we know. We teach them what we know and we learn from them,” he concluded.