An annular solar eclipse will fall on December 26, this year. It is the year’s third and final solar eclipse, though it’s the only annular eclipse occurring this year. People from the eastern hemisphere will be able to observe the phenomenon. More specifically countries including Saudi Arabia, Qatar, United Arab Emirates, Oman, India, Sri Lanka, Malaysia, Indonesia, Singapore, Northern Mariana Islands, and Guam. Cities such as Doha, Madurai, Pekanbaru, Dumai, Johor Bahru and Kuching are to miss the event narrowly.

If you are from the Kathmandu city, the eclipse will be visible from 8:43 AM and will end at 11:31 AM. However, it will visible only partially from here. 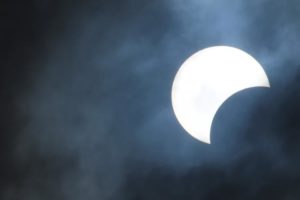 But you can still enjoy this spectacular event. It will be 2 hours 47 mins and 54 secs long with the maximum visible eclipse time at 10:01 AM.

The path of the annular eclipse will start from Saudi Arabia and will end at Gaum. The areas where the annularity will be visible in this path are the southern parts of India, Sri Lanka, and Indonesia. The next main areas to observe the eclipse are Palau (Malaysia), Sumatra and Singapore.

So what is an Annular Solar Eclipse?

A solar eclipse occurs when the Moon passes from between the Earth and the Sun. In a solar eclipse, it is the moon’s shadow that falls on the Earth’s surface. They are only visible from the area where the shadow falls, hence, the eclipse looks bigger if one is closer to the center of the shadow’s path.

An annular solar eclipse is when the new moon covers the Sun directly from the front, but because of its smaller diameter, the outer edge of the Sun is visible, forming a ring. The annulus (ring) around the moon is also referred to as “ring of fire”.

Five different stages of the eclipse:

The total duration of an average annular solar eclipse is six hours in total. For the locations where the annularity is visible, it can last for over three hours. One must never look at the solar eclipse with naked eyes. Its rays can burn the retinas of the eyes leading to permanent damage or even blindness. Proper eye protection must be used, like eclipse glasses.