I am called Ganesh, known by Hindus as the God of Good Luck. Just 180 years ago, an image of my likeness was commissioned by Dhan Raj Shrestha, a rich merchant of Kathmandu. For this purpose, he chose the best stone carver of Kathmandu who took three months to construct this beautiful image that would awe and inspire the people.

About three feet tall, I am seated in a lalita vistara position, one leg folded in a meditative posture while the other leg is positioned in readiness to stand. I have four hands with which I am holding a noose, an ax, and a club, while the fourth hand is displayed in varada mudra, i.e. the boon-granting gesture.  Because of my ability to remove obstacles from someone’s life, I have long been a favorite Hindu deity. Everyone adores me.

People from all walks of life come to me to seek my grace.  In their prayers, they ask me to remove difficulties from their lives and bless them with success. Tuesdays in Nepal, known as Ganesh days, were special days for me. And every week a large number of people would throng to my shrine.  As offerings, they brought penda (sweets made out of milk and sugar), as well as flowers, incense, dry rice, red powder, fruits, and money. Some devotees of means even offered brass bells that were attached to the door jamb of the shrine. These bells were rung by petitioners as they approached me, letting me know they had come to worship and ask for blessings.

The serious types bring a platter of offerings and sit down in front of my image to perform puja.  But many make casual visits to my shrine on the way to school or work. They salute me so that I may bless them and grant whatever wishes come to them during the day.  Sometimes they tell me in silence their personal problems and my compassion reaches out to them. Some ring the bell while they circumambulate my shrine three times in the hope that I will be pleased with them. The act of ringing the bell is regarded as making an offering to me. 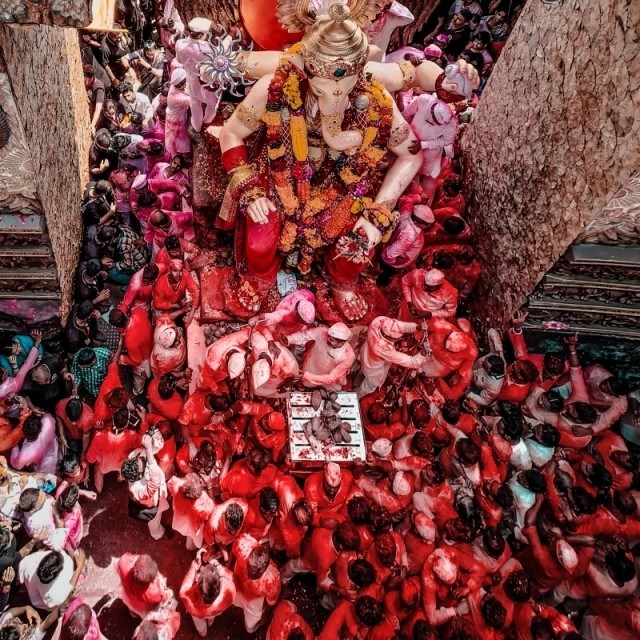 After one especially hectic Ganesh Chaturthi celebration, the priest offered the last aarati at 8:00 p.m.  When all the devotees had left, the priest cleaned the temple floor and collected the offerings given to me by the devotees. He closed the doors, securing them with a strong padlock.  Before leaving, he did namaskar to me by folding his hands. In return, I bid him a silent good night. Sadly, that would be his last goodbye to me.

Several hours later, I heard the doors rattle as someone struggled to open the padlock.  It was pitch-dark and quiet outside. Why would the priest be returning this late at night?  Did he forget something? I couldn’t figure out. Finally, the doors creaked open and two individuals entered the shrine and shut the doors behind them.  They were not priests, nor were they temple staff. When they whispered so as not to make noise, I knew something was not right.

Of course, I couldn’t shout because I am made of stone and do not communicate with humans through speech

With a hammer and a crowbar, they pulled the metal belt with which I was held to the temple wall.  It wasn’t hard to yank the nails out of the wooden poles. After the men took me down from the pedestal, they wrapped me in a dirty smelly blanket. Two men carried me to a waiting car parked just a few feet outside the temple door. A dog in the distance barked to warn against the illegal activity being perpetrated in the temple but the men very quickly shoved me into the trunk of the car and left as quickly as they had come.

I was being stolen

But only gradually did I, a stone Ganesh idol, discern my fate and my destination. That night I remained in the car’s trunk, parked in a garage somewhere in Kathmandu.  The next morning I heard the voices of people and the sound of an electric saw cutting through wood. Preparations for something were definitely going on. Then I heard the sound of hammering; something was being constructed. I sensed the presence of four or five people. Then the trunk was opened by the same two men who had stolen me from the shrine, and the next stage of my journey quickly began.

It was obvious they were preparing to transport me to yet another location.  But I didn’t know where because, the noises made by the hammering and the electric saw drowned the conversation the men were having. After removing me from the trunk, the thieves removed the blanket and then I  was able to see with my own eyes what was going on.

The carpenter measured my height and width to assure himself they would be accommodated by the wooden transport crate he had just fabricated. After taking my measurements, buckets of water were brought and workers were instructed to wash me thoroughly.

The ringleader supervised the cleaning 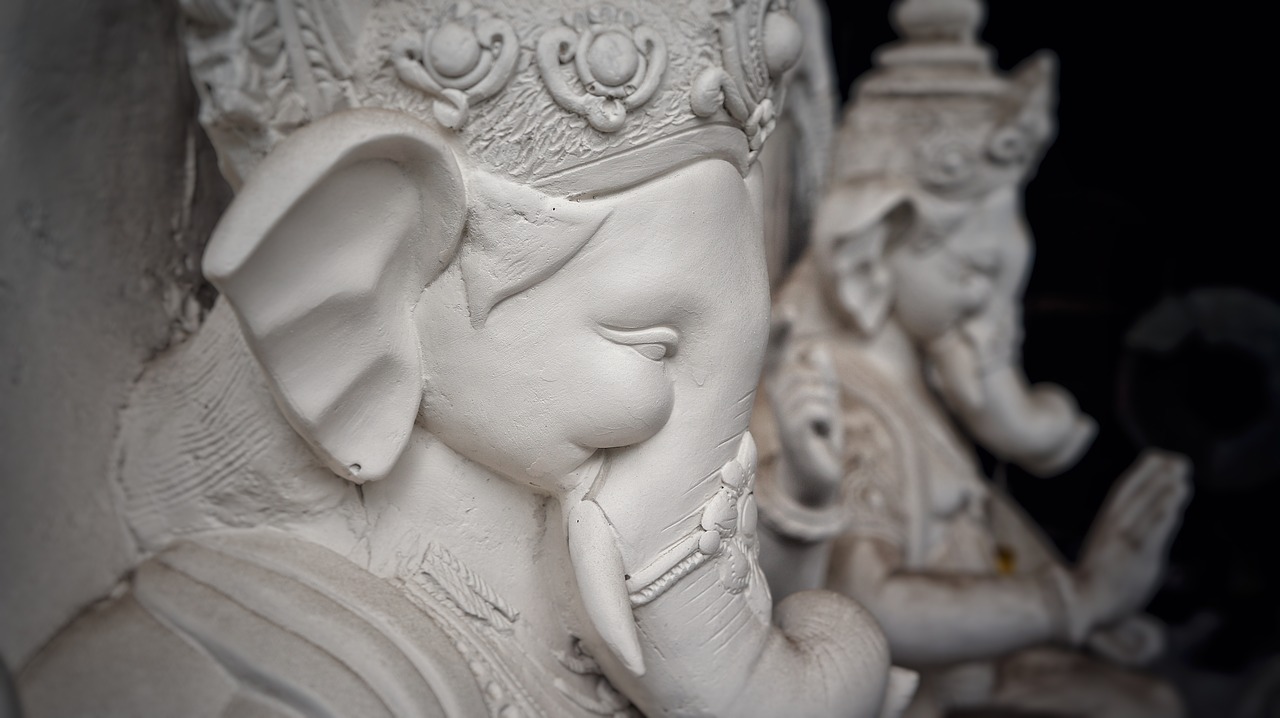 He asked another man to apply liquid soap and bleach to remove any traces of oil and vermilion powder on my surface. “Make sure there remain no signs of worship or veneration on the statue of Ganesh. All residues of puja offerings must be gone before you wrap the statue,” he said.

All that would remain would be a carved, lifeless image. Men scrubbed me thoroughly with a hard brush and washed me several times until all evidence of my sacred relation to the Hindu people had been eliminated.

When completely cleaned, they wrapped me in layers of bubble wrap no doubt to prevent breakage of my many fragile surfaces and edges.  As thoroughly bound like a mummy, I was then carefully placed flat in the coffin-like crate. Once I was securely inside the crate, they filled every open inch with newspapers and pieces of Styrofoam. It provided extra reinforcement so that I could make not the slightest movement or suffer the slightest damage during transport.

The carpenter finally sealed the lid with several nails. With the extra precautions they had taken, I could guess I was bound for a long journey. That journey was definitely long, one that lasted three months. Although I was so securely bound that I sensed very little movement, I began to surmise that I was on a ship that crossed the seven seas.

My inner senses came into play and told me we had traversed the Pacific Ocean and I was aware when we finally reached North America. As I absorbed the knowledge of my new environment, I realized we had reached California.

There I watched as I was taken through U.S. Customs 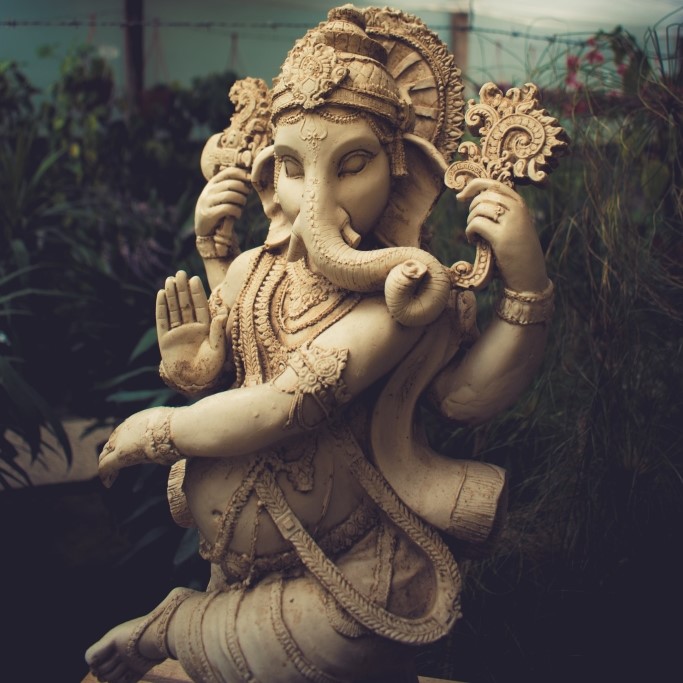 I was removed from my confinement and my layers of wrappings and thoroughly examined in front of the agents who came to claim me.  They had forged documents that stated that I came from a private home in Kathmandu. And I was no more than 50 years old.

This was to avoid Nepal’s antiquity law that forbids exporting art objects older than one hundred years. So, I was suddenly reduced to less than half my true age. After a successful clearance, I was placed in a large vehicle, secured once again by various contraptions to protect my fragile surfaces and edges.

After two hours, the driver pulled the van up into the unloading dock of a very large building. Obviously, this was not a private home, but a public institution, one I quickly realized was a museum.  After a ride in a service elevator, I was placed in a storage room, where I remained for another two weeks.

Finally, a man whom I learned was the museum curator along with a few other members of the staff came to examine me.  The photographer took pictures of me from every angle and then they left. A woman returned later to place an identifying a tag on my sculptured base.  On the tag was a number, ensuring me that my future existence was to be a prisoner.

I was finally placed in a glass case with a placard, that contained false information about who I was, where I had come from and when I had been sculpted.  Dhan Raj Shrestha’s name was omitted and the Ganesh shrine from which I was stolen was not identified. The information provided to the museum curator and the information printed on the placard gave me an entirely fake identity.

In my new home, I will not be honored or venerated as the Nepali people did while I resided in a small shrine in Kathmandu.  There, when the temple opened in the morning, the priest began my day with a puja and the devotees came with offerings. I was greeted with the sound of bells, mantras and blessed fragrances of flowers and incense.  Devotees offered flowers, vermilion powder, and sweets. But here, none of that will be offered to me. Here I am simply an object of curiosity. People will stare at me as if I am some kind of freak. Like a meaningless image with four hands and the head of an elephant on the body of a human–I am an exotic item.

But I will always know who I am. The sacred image of a loving deity Ganesh, who listened to the hearts of his people and who graciously received their gifts and petitions, and sent blessings into their lives.