Growing up abroad we heard words like BBCD – British Born Confused Desis (substituted ABCD for Americans), Coconut (brown on the outside white inside) and plenty of other stereotypes that were used to put ‘people like us’ in a box. Back then, I was very much a Nepali with Nepali culture who had just been living in the UK for few years, couldn’t understand why I was categorised as such, but then those few years turned into a decade and has now been almost two decades. My identity since then has evolved significantly.

There’s been a lot of discussions lately about what being a Nepali means. The Madesh crisis (which has now evolved into much bigger Nepal crisis) has brought out ‘what it means to be a Nepali’ in the forefront of everyone’s discussion and this is very interesting for those who can easily be labelled ‘bideshis’ like us to understand the mindset of many people. Often there are comments flying about how ‘bideshis’ or ‘bideshiyeka Nepalis’ shouldn’t be commenting on Nepal’s struggles and troubles while sitting in our comfy chair (actually my comfy chair is my comfy bed) with no recent exposure to Nepal troubles (oh apart from that time we went to attend a relative’s wedding and man, did we complain the whole two weeks we were there?

Roads were so dusty and polluted, no streetlights, no one following traffic rules, and now no gas? Black Market thriving everywhere?). And if you are an actual bideshi, like you know with white skin, then god forbid, you comment on anything that has to do with Nepal without several people putting you in your place, sometimes wondering who is it that is paying you to criticize, maybe one should report you to the police.

What I am saying is, yes there are people who still associate themselves with Nepal even though their day-to-day struggles is far removed from the reality of what Nepal faces. They may consider themselves as Nepali just because they have mo:mo parties, dashainparties, teej parties, and occasional fundraising events to raise money for earthquake, funding for a local school in a remote gau. This doesn’t mean the diaspora (minus migrant workers) are all like that or that’s all we do.

I know of many people, friends, who moved away from Nepal at a very young age, not their choice I must add, because their parents decided to move, who then made a choice as an adult to go back and live in the country, immerse in the culture to understand it better, and to contribute towards its economy. Some people sacrifice a lot, their job, their support system to be in a country that is supposedly their own, but at the same time feels so alien to them. They may understand the language, but cannot always understand the logic behind things when they hear ‘yaha ta yestai ho’. Some people have contributed so much through their charity work that it’s unimaginable because of their love for the country and its people.

So lumping all of us together and stereotyping is a bit wrong. Just saying.

I may not be able to reiterate everything, but I spent a lot of time reading about modern history of Nepal when I was there. Sadly, it didn’t take long for me to understand that my kakshya 5 mahendramala-esque history education was heavily propagandized. It took me living in Patan to realize my essay in school about how Tihar is celebrated throughout the country was factually incorrect. Not everyone observed it the way I did. It took my visit to far west Nepal to experience that ‘Nepali’ I spoke and ‘Nepali’ that was spoken there were very different. There were few miscommunications; on my first day to my dismay, I thought there was going to be mohi (diluted yogurt) when someone was referring to themselves. I realised what I spoke was very ‘mero saral Nepali’ whereas Nepali spoke there was much more authentic and was even a little melodious.

When I returned to Kathmandu with my stories, I was told they speak Nepali differently there. However, when in Kathmandu, when a Tamang boy spoke Nepali his way, people were quick to comment that’s not how you speak ‘proper’ Nepali. After living in Kathmandu, I tried to adopt kathmanduspeak (mixing Nepali with English), a gender-neutral version which was very different from my mero saral Nepali with terai ko twangs and words, the version that had evolved from Bhojpur to Biratnagar to Britain. 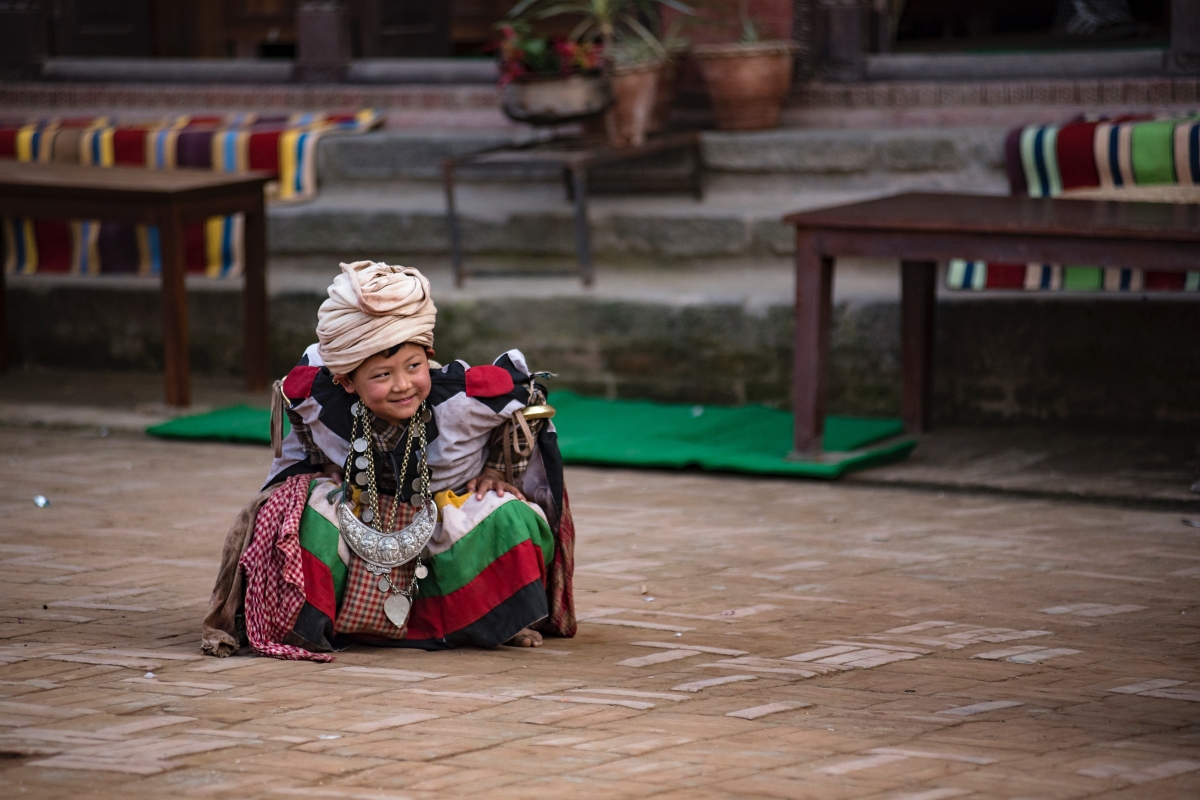 I was a bit older when I learned that not everyone in Nepal speaks Nepali. When in a hostel in Kathmandu, one of the dai’s parents could only speak in Newari, they were from somewhere far away near Banepa. I was a bit disappointed when I found this out. I didn’t have a secret language I could speak. Language is something I love, the feeling isn’t as mutual, but it’s slowly getting used to me. I love the history of language, its evolution, this is how I connected to a person even in Turkey, some of our words were similar. I was disappointed that there was a language I could have grown up learning had Nepali not been spoken at home. I could have been multilingual (which I am, thanks to my two years of Indian school education and Bollywood), but to learn another Nepali language would have been so much more awesome. Imagine if we had an option to learn Newari or Gurung Bhasa in school, wouldn’t that be much more inclusive?

For some reason, Madesh’s plight for Nepali identity really speaks to me. Maybe because I have been bestowed with my identity through my parents, or my linguistic ability, I don’t naturally feel pride over what is perceived as being Nepali. Unlike some others who naturally feel this pride immensely. Maybe this is because I am a woman and no matter how proud I am of my Nepalipann, I will be seen as ‘other.’ If in future, I decide to marry a non-Nepali person then my children will never get an option to be a Nepali, even though they will be Nepali aama ko chora chori (motherland’s son daughter), but never Nepali in the law’s eyes.

As a child, I was completely unaware of Madhesis being Nepali even though I lived in the south for a time, people didn’t acknowledge Madhesis as Nepalis. My ignorance still embarrasses and humiliates me. The Indian school we attended had many varieties of people, Indian doctors’ children, Indian teachers’ children, wealthy Madeshis’ children, Marwari children and a mix of Dharan-Biratnagar ‘pahade’ kids. But somehow I remember kids would only make fun of the Madeshi accent.

During my visit to Nepal after the Second People’s Movement in 2006, things were a little different in Madesh. Everyone was talking about the rights of Madeshis and my relatives were talking about how you have to be careful because you can no longer treat them the way you did. In the past, shouting at them, not giving the right amount of money, mocking them, name-calling, and pretty much not treating rickshaw people like humans was very common. I cannot even write what I experienced when it came to ill-treatment and prejudice against Madeshis from some people in Kathmandu.

When we were kids, our essays about Nepal were about how it had so much diversity, culturally and ethnically, and how proud we were in our nepali culture. It’s something I certainly told anyone who asked me about Nepal in my later years. What I hadn’t realised was even though it was diverse, it certainly was not inclusive. What I thought was meant to be Nepali, was not what Nepal was about, we respected the diversity, but not everyone was equal because of this diversity. Not being able to speak Nepali ‘properly’ meant you would limit yourself from getting a good education and good job, the language/dialect you spoke wasn’t recognized officially, and often called ‘incorrect’, the festivities some people celebrated were not in our school books.

We were looking at Nepal with a rose-tinted glass, and the view was of a woman standing outside her thatched house wearing gunyu cholo, tending to her cattles and a baby, whilst her husband in daura suruwal was working in the field, with a picturesque mountain in the background. That’s what I thought being a Nepali was about.Which brings to where I am now, with my identity, to others I may be confused Desi, British Nepali, and ‘na yata ko na uta ko’ and to some ‘a bideshi’, I often tell them I am the best of both. Yes both my parents were pahade Nepalis (although that’s debatable, my mother has never been to pahad, neither did her mother).

I lived in Terai for a few years and also went to school in Kathmandu, but have lived abroad for most of my life. I feel more comfortable speaking in English yet my Nepali is what people would callsuddha Nepali. I am not really a fan of Nepali customs and or traditions, because I think traditions are man-made and it had only benefited certain members of the community. I don’t feel comfortable wearing sarees, but I think if we look at that detail then even that’s not Nepali, it’s Indian.

However, I am certain I will get married wearing a saree (but I hope no kanyadaan). I have never tried gunyo cholo, apart from that one time when I danced in a Nepali function. I have never worn Nepali dhaago on my head and I absolutely detest gold or anything that is flashy. I love momos and dal-bhaat, but then again, I equally love seafood. I love being in Nepal, but I enjoy just as much being in England (even though it’s cold and rainy). I hate being made to go to temples, but I also love being in a serene place with a lot of positive energy. When I am with my parents or family, I celebrate Dashain, but I am not too keen on everything that comes with it, overindulgence, khasi ko masu, or women spending most of their time in the kitchen. And it’s been a long time since I’ve enjoyed listening to Nepali songs, does Bipul Chettri count, he’s an Indian, but sings Nepali songs?

So what is it about me that makes me Nepali?

The language I speak? Clothes I wear? Where I live? Festivals I celebrate? Food I eat? Beliefs I hold? Is it how long I have lived in Nepal for? Legal status? Am I less Nepali now I confessed I don’t actually enjoy Nepali songs, dances, or wear ‘Nepali’ clothes? More importantly, how is it that I am more Nepali and the other person isn’t? How come an Indian who lives in Sikkim or Darjeeling who wears dhaka topi and speaks Nepali with some twang more Nepali than a person who lives in Terai? Or is Nepali an ethnicity that comes with one’s surname? Is that why Manisha Koirala is seen as Nepali, but Udit Narayan Jha as Indian?

Even though she spent most of her time in India and he completed his education in Nepal before moving. Living in Nepal, my surname came with a lot of privileges. I also realized that if my ancestors hadn’t made certain decisions in their life, I could have easily been that woman tending her cattle with mountains in the background (I can assure you I certainly wouldn’t be speaking suddha Nepali then).

So am I Nepali enough? Why?

** Share your thoughts! What makes ones Nepali, what doesn’t? How do we define identities? Can we?