Bikash Sainju, a local of Panauti in Kavre district, used to travel every day to Kathmandu for his job. He used to work in a job where he got only six thousands rupees a month, which was ever only sufficient for his monthly travel cost. But, for him, the saddest part of the job was how it affected the father-daughter bond.

While traveling to Kathmandu, he rarely used to get the chance to spend time with his daughter, Binisha, who is very near to him. 12-year-old Binisha also used to long to see her father’s face; he used to leave early in the morning and only to return late at night when she was asleep.

Bikash always used to carry this guilt of not being able to send her to a good school and give her good education. Because of which, he used to believe the father-daughter bond was emotionally strained. “The salary I got from that work was not enough, not for my family and certainly not for my daughter. I saw them compromising their needs and, being a father, it hurt me a lot,” says Bikash.

Frustrated, Bikash left that job and stayed at home. For a brief time, he felt the happiest. He got the chance to spend more time with his daughter and his family. However, being the head of the family, his responsibilities and duties didn’t let him stay at home long.

Soon again, he went in search of a job. “It’s easier to get a job if you have the academic qualification and that’s exactly what I lack. In situations like these, I regret not going to school at my age,” says Bikash.

Tired of searching for a good job here, he had even started thinking of going abroad. But, the fear of being away from his daughter and family scared him. So he kept searching for a job here only. 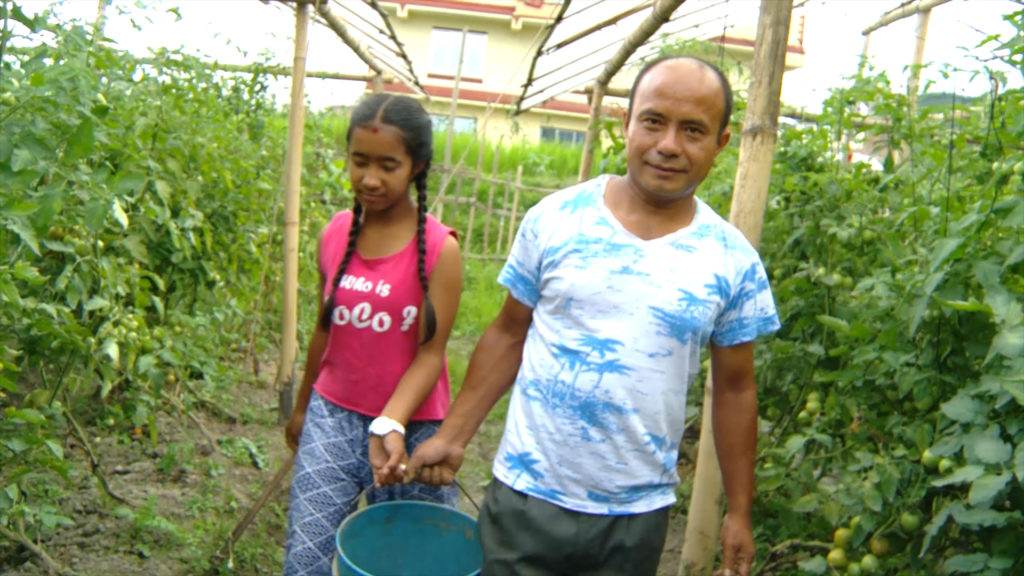 Bikash and Binisha Sainju working in their tomato field. Working together has deepened their father-daughter bond.

One day, nearby his home, he heard that Gyan Bikash Community Library was running an agriculture training for the farmers, so he decided to take that week-long training. After the training, Bikash thought of utilizing his bare field for farming. So he took a loan and started tomato farming.

He struggled a bit in the beginning. But, with the help from trainers, he managed to create a business of his own. It has been a year and today he is happy. Mainly because he is working nearby his home which lets him spend more time with his daughter. Bikash says, “With tomato farming, I earn monthly 35,000 which helps me enroll my daughter in a good school and fulfill my family’s needs too.” 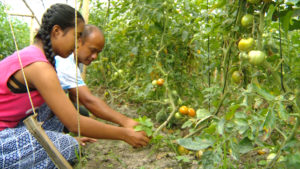 Bikash and Binisha Sainju working in their tomato field, in Kavre.

Binisha too is happy as she got into a new school and now gets to see her daddy’s face often. In her leisure, she helps her father in the field and says, “I feel lucky to have a father like him who struggled a lot to send me to a good school and to spend time with me.”

Bikash has also started one small shop to make some extra money and to utilize the time he gets off from farming. “I was depressed with my life. Now I realize that we can start working in our own country, start from small things and make enough money for oneself and the family. And I get to be with my daughter, watch her grow and cherish my time with her,” says Bikash.