We have enjoyed Nepali music from our very childhood. Music touches our life in an extraordinary way. From singing “intu-mintu London ma“, “lek ka hami keta keti” to “hami yestai ta ho ni bro” we have all grown up to singing different genres of Nepali music. It’s 2019 now and Nepali songs have come a long way. While some may argue that the quality of Nepali songs have degraded over years, we differ to this statement. Meanwhile, here are 10 top Nepali songs of 2019 that you absolutely shouldn’t miss. 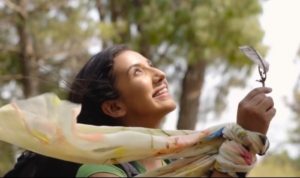 After years, Abhaya & The Steam Engines came up with a song, an incredible one at that titled Hawa Huree. This song speaks about reminiscing our past, hence motivates the listeners to realize the beauty and importance of the present time. The song also features our legendary folk singer Ganga Bardan Shrestha. The unique voice of Shrestha adds a mesmerizing flavor to the song.

This song released on YouTube on July 9, 2019. As I am writing this article, this song has gathered approximately 1.2 million views. The music video sketches a hike to the hills of Nepal, therefore it really makes you want to break free your normal routine, gather close friends and travel somewhere far.

Galbandi, a song by Prakash Saput has to be undoubtedly the most popular song of 2019. From children to the youths and to the elders, people of all age are enjoying and humming to this song. In other words, this song surely has dominated our local buses’ playlists and seems like it will, for quite a significant time now.

This song released on YouTube on May 25, 2019. Meanwhile, Galbandi has collected about 29.1 million views on YouTube. The music video features a dohori (Nepali folk song) kind of set-up, where the boy is trying his best to impress the girl.

The whole village is made a part of this fun song, with certain catchphrases such as “dhila ayo, kada ayo” and “halka gastric” which makes you giggle and thus has inspired a number of memes.

This is one of the very rare songs in Nepali music industry that portrays a LGBTQI+ story in the video. Sajjan Raj Vaidya’s Hataarindai Bataasindai is soothing to the ears and is glorious due to the fact that it’s a song that celebrates love, a love without conditions and judgments. Hence it makes it to the list of top nepali songs of 2019.

This song has received a lot of praise and positive responses from the Nepali audience. Likewise, youth have absolutely loved this piece and it shows that our society is getting educated and progressing in terms of acceptance; that’s the beauty of a magical song. This song released on January 2, 2019, and has about 10 million views on YouTube already. 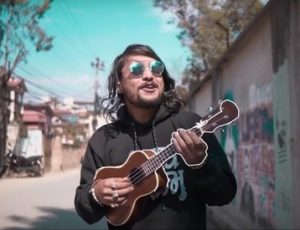 Budi by 5:55 is a cool and a fun song. Simple words and a catchy tune is what makes this song everyone’s favorite. The music video features the singer himself Chirag Khadka. He plays ukulele, singing the song in a cool avatar. The song has a hippie touch to it. The singer sings about the lengths he is ready to go for his girl and how he imagines his whole future with her, in a chilled manner.

As you listen to this song, you get hooked on to it, which is why this song made it to the list of top Nepali songs of 2019. Even though you have heard it many times, you never get tired of it. Budi was published on YouTube on February 14, 2019 and has approximately 17.4 million views.

Similarly, another catchy song is Oh Maicha by Brijesh Shrestha and Barsha Karmacharya. ‘Oh Maicha’ is loosely translated as ‘Oh Girl’ in Nepal Bhasa. The story in the video plays out in a typical Newari background, while a girl and a boy are struggling to convey love to each other because of parents’ and society’s restrictions.

The song comprises of few words from Nepal Bhasa; the Newari touch makes the song really special. Oh Maicha has garnered over 9 million views on YouTube, published on March 2, 2019. The tune sounds good, lines are catchy and the video is equally entertaining, and we can see why it has become a fan favorite.

We all have definitely heard the song Pirati ko Mitho Tirsana before and have fallen in love with it. The iconic song has been recreated in 2019 by Uday Raj Poudel for the movie “Bir Bikram 2“. It is one of the most loved songs from the ’90s, likewise the remake also is absolutely elegant and singers Tara Prakash Limbu & Melina Rai have done full justice to it.

Once you listen to it, it makes sure that you repeat it again and again. This song released on YouTube on January 3, 2019 and has gathered about 13.9 million views till now.

We often don’t find Nepali songs that are different from the regular ‘lovey-dovey’ theme, and Ma Dami Chu by Samriddhi Rai happens to be one of them. This song focuses on how one should have pride in the uniqueness one carries. 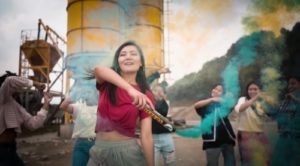 “Thulo haso mero rokera rokinna, sarvagun sampanna pani ma dekhinna, teini ma j chu thikai ta chu, ma dami chu” such beautiful lines that every young Nepali girls can relate to and enables them to allow the society to judge the way they simply are. Therefore, this song has been quite popular among girls and makes it to the list of top nepali songs of 2019. There is finally a song that talks about appreciating oneself. Published on YouTube on April 21, 2019, this song has collected over 1.7 million views till now.

Sushant KC came up with the song Gulabi that has been utterly adored by Nepali youngsters. It is one of the most loved Nepali songs of 2019. The song talks about a boy who is attracted to a girl and how badly he wants to kiss her Gulabi (pink) lips. 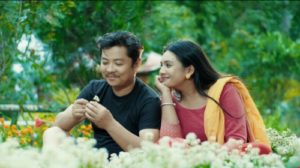 Paraanai Dinchhu is a masterpiece of love and struggle, sung by Hari Lamsal and Melina Rai. The song consists of pure love, hardships and happiness. This song touches your heart such that you just cannot dislike this song.

The music video teaches us one important lesson i.e. one doesn’t need much to be happy. Furthermore, it shows two lovers who don’t have much but are more than happy to have each other. This song released on May 3, 2019 and has garnered about 7.4 million views on YouTube.

Sanjha Parepachi is a melodious Nepali song, by Snehshree Thapa and Anmol Gurung for the Nepali movie Appa. This song has a romantic feel to it that makes you miss someone; even though you may be single and may not know whom you are missing, but still you catch that feeling. Likewise, those who are already in love will surely relate to this one.

This song released on YouTube on February 18, 2019 and has about 4.2 million views till now.

So this is a list of the top Nepali songs of 2019 that you should definitely listen to. If you love Nepali music, you would be proud to witness how progressive our music has been in the recent years. Hence, let’s hear more Nepali songs and support Nepali music. Cheers!