Nepali artist Sushma Shimkhada was a feminist, a radical, and a rebel, who was way ahead of her time. She began her career in the early 1970s, and her journey wasn’t an easy one. In Nepal, the profession of sculpture belonged traditionally to males – and as the first female sculptor, she constantly combated this. She established herself as a formidable artist, earning several recognition and awards. Her works were exhibited, acquired, and sold both domestically and internationally. Unfortunately, the honeymoon period didn’t last long. Her flourishing career came to a halt in the mid-1980s, when she was afflicted by debilitating osteoarthritis.

Many of her pieces depicted children and women. Why she focused on them is a journey of sorts, which will take us back in time and place to delve into her life and philosophy of the womb that she embraced as she was emerging as a sculptor. 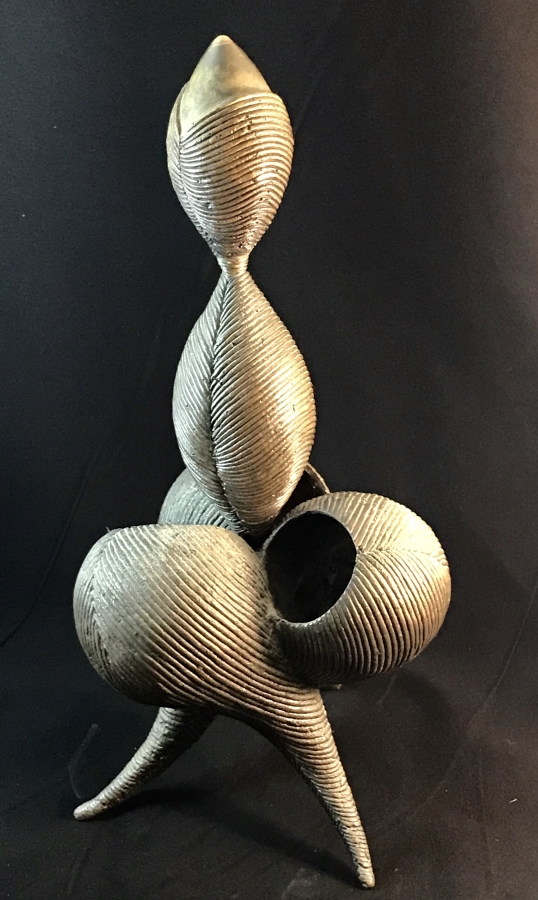 When asked about this particular work, Sushma told me, “A womb is our home, our universe. We were all created in the womb and we return to it.” In this prophetic statement, I saw her philosophy in life was veiled. I started peeling off the layers of coverings to reveal the intentions behind some of her works. I was drawn by this piece that depicted the idea of the womb, and started analyzing her work in the context of Hindu feminism.

The womb represents creative feminine energy – a place where life can be created and nurtured. Hence, it’s a sacred space. A womb takes on the role of many positive things in life.

BUT WHY THREE WOMBS?

According to Sushma, three is a complete number because it represents past, present, and future – a totality of time. As long as there is creation, the womb will remain. Without it, there can be no creation.

In this piece, Sushma has deliberately conflated the ideas of balance and harmony with the images of linga and womb. However, in the image under examination, there are three wombs and a single linga, squeezed in the middle. The linga is completely under the control of the wombs – the female energy. Although the existence of a male principle is necessary for the continuation of life, the artwork portrays, its dominant position is checked by the female principle. It demonstrates the superiority of the womb – the mother principle.

The rounded shape of the womb resembles the planet Earth or a pot (Kumbha). The ocean is a gigantic womb where early life formed, and it’s still home to a myriad of marine creatures, both small and large. Water is, therefore, the amniotic fluid that engenders a life of all forms and, hence, a womb that folds life-sustaining fluid is our mother.

For her, the three wombs also equal to Tri-Loka. Tri Lokas, in Hindu cosmology, are representative of our solar system; they combine our physical world, intermediate space with atmosphere, and deep space without atmosphere.

Coming from a great devotee of the Goddess Kali, goddess of both creation and destruction, the artwork also stood as a representation of both a cradle and a grave. Anything that is born must die; it is the law of nature. Western scholars are only recently recognizing the womb’s powerful dual standpoints. However, Hindu theologians had acknowledged it thousands of years before.

One can see her stance against age-old, male-dominated traditions and how she intended to rebel against patriarchy symbolized by linga. Linga is a pillar, an object with a sharply pointed head, a phallus, or an axis mundi. Its nature is to penetrate, however, whether it causes pain, pleasure, or even achieves the desired result depends on the intent. Through her works, she portrayed that a balanced relationship between the male and the female –Purusha and Prakriti, symbolized in art by Linga and Yoni – is necessary for a successful life. When that balance is broken, discord takes place, leading to destruction.

She believed that goddess Kali was superior to all male gods although according to Purusha Suktam. Purusha, the Supreme Almighty, is said to be all that is past, present and future. However, Sushma did not see Purusha that way. Her advocacy for the Goddess is clear when we take the verse three of the Devi Suktam where the Goddess proclaims:

” I am the Queen of the Universe-I give wealth to those who worship me. I am the all-knowing one and the prime one among the worshipable deities- I enter many bodies as the Atma, taking various forms and with different manifestations, in various ways.”

This may corroborate Sushma’s belief in the Goddess. However, one’s superiority over the other is not ideal to bring about harmony.

In her artwork, she has also spoken against any kind of oppression through her art. Most of her works are, therefore, inspired by her convictions against dominant culture, society, government, and even patriarchy. In that sense, Sushma Shimkhada was a rebel who, through her art, fought against these menacing forces. In Sushma’s eyes, corporations and people in power damage and destruct the Earth, women, the poor, the sick, and the weak, was true violence.

Sushma Shimkhada was my sister, who passed away on February 5, 2018.

When she was barely 14-year-old, Sushma was married off to a 25-year-old man from a distant village. She returned to her home after four days, as customary of the then Hindu tradition, but she decided not to return to him. Our parents honored her wish and even gave her equal claim to the parental property. Events as such, I believe, shaped her life as a feminist and it got reflected in her work too.

Sushma remained a spinster, as she could not give birth. Unlike many though, she acknowledged her limitations and reveled in company of her nieces and nephews; treating them as her own, creating fond memories. How Sushma professed her love for children in her artworks remains noteworthy. Many of her earlier works were of children playing alone or with their mothers, depicting a dimension of her real life. Since children emerge from the womb – the place they call home during gestation – she believed that they serve as a bridge between womb and their mothers. Because of purity and innocence in children, she saw the image of the Divine in them. She often called children ‘Little Gods and Little Goddesses’.

When the 7.8-magnitude earthquake shook Nepal in 2015, everyone fled to open spaces, seeking protection from collapsing homes. Sushma, however, did not leave her apartment as she could not walk but remained calm. She had a foot surgery, performed just few weeks prior to the devastating earthquake. She often used to meditate and worship goddess Kali for hours at a time; and had reported having visions of the goddess. According to her, the Shakti she gained through meditation allowed her to go through life, especially during the natural disaster.

**This is but a small tribute to her from her brother, who could not be with her at the time of her passing. Her legacy and memory will remain with me for the rest of my life. Her short biography can be found on Wikipedia.