The Indra Jatra festival, also commonly known as Yenya (in Newari language) is one of the most popular festivals celebrated in Nepal. This festival is mainly celebrated by the Newar community, but people of all caste revel in it equally. The festival is eight days long, with the main attraction being chariot processions that lasts for about three days.

According to the lunar calendar, this festival falls starts from 12th day of waning moon and ends on 4th day of waxing moon. Indra Jatra festival is marked by a fervorous celebration of chariot processions, masked dances of deities and demons, displays of sacred images and idols, in honor of Lord Indra, the King of Heaven.

Some believe that Indra Jatra was started by King Gunakamadeva to commemorate the establishment of the Kathmandu city in the 10th century. While others believe the legend regarding Lord Indra’s visit to Earth. It is said, in his human form, Indra came to pick parijat (night jasmine) for his mother. But he was caught in the act by the garden owner and was kept in prison. Indra’s mother, Dangi, came to Earth in his search and demanded his release. After people recognized who he was, they decided to let him go and dedicated one of the most colorful festivals of Nepal to him, ever since.

Indra Jatra as celebrated in present has many more elements than just the stories, all of which are equally important and entertaining. 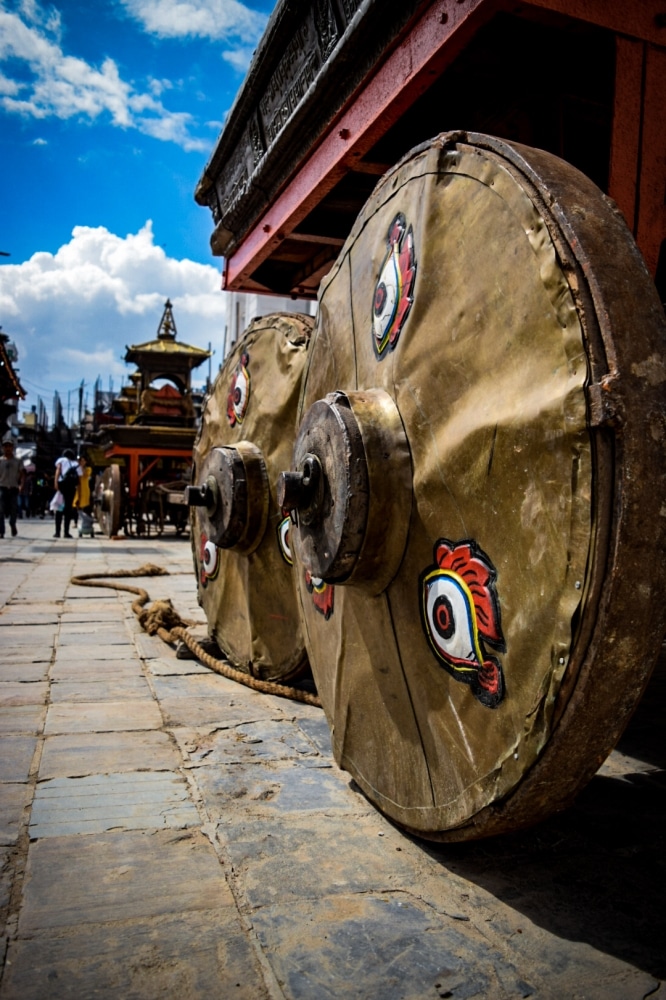 Chariots to be pulled on the processions during Indra Jatra festival at rest in Basantapur Durbar Square, on Tuesday. Photo: Nischal Baidya

All three placed in the chariots have their own significance in this festival. The chariot with Lord Ganesh is leads the procession, followed by the chariot of Lord Bhairab. And at last the decorated, three-storied chariot of Goddess Kumari. Young boys of around 5-6 years are chosen as embodiment of Lord Ganesh and Lord Bhairab. While young girls of age 3-7 from Bajracharya and Shakya castes are selected. If one is to become a kumari, she shouldn’t have any bodily imperfection and has to go through various rituals including being calm and collected throughout the tantric rituals. Similar criteria are fixed for the selection of Ganesh and Bhairab as well.

Talking about chariots, there are three separate chariots for the three living embodiment of the gods and goddess. They are all taken out on the first day of the Festival and are on display at the Basantapur Durbar Square near the Kumari Ghar. The chariot of Lord Ganesh and Lord Bhairab are one-story while the chariot of Goddess Kumari is three-stories.

According to Gutam Shakya, Chairman of Indra Jatra Byawasthapan Samiti, all the items of chariots have been recently renewed. He said that the wheels of the chariot were supposed to be made out of wood but were recently replaced with a brass one since it was getting old. 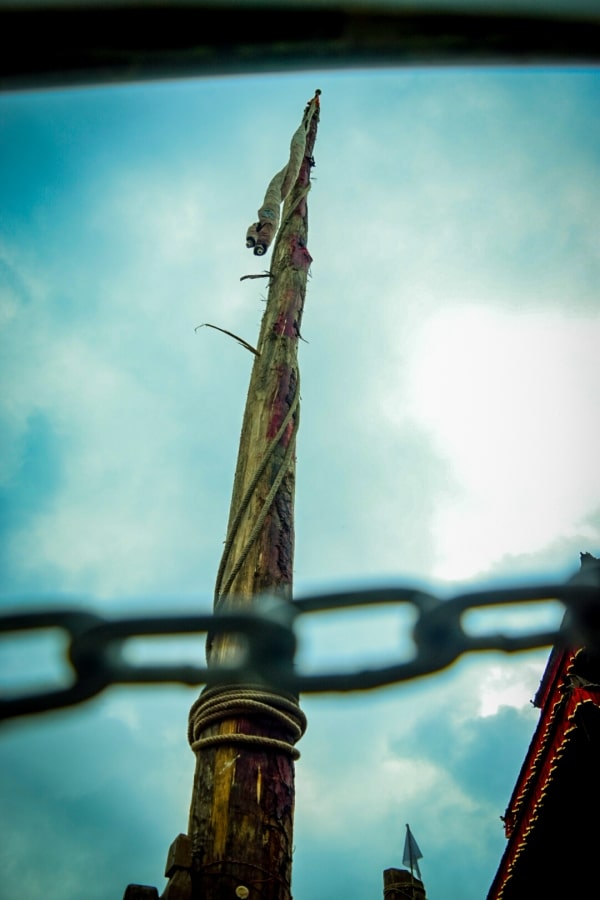 Yashi, or the ceremonial pole at Hanuman Dhoka, on Tuesday. Photo: Nischal Baidya

The festival of Indra Jatra officially starts, only after the Yashi or lingo (a long ceremonial pole) is erected. The pole is first worshiped according to rituals and erected at the Hanuman Dhoka, in Basantapur. Each year, specifically for this festival, people of the community select a sal tree from from Naala forest in Surya Binayak, Bhaktapur. The pole is 60 feet high and is dragged first to Bhotahity and then taken to Basantapur for the ceremony.

The processions are three day long celebration. On the first day, the procession begins from the Basantapur Durbar Square. From there, the procession then follows its route and goes through places like Chikanmugal, Jaisidewal, Lagan, Brahma Marga, Wonde, Hyumata, Kohity, Bhimsensthan, and returns back to Basantapur.

On the day, another procession is also carried out. A man dresses like Dangi, adorning a mask, and goes around the city, accompanied and followed by a musical group. The procession is the re-enactment of the legend where Indra’s mother’s, Dangi, goes around town in search of her son. This procession usually starts at night, after the chariot of Kumari returns to Basantapur, journeying around the southern part of town. 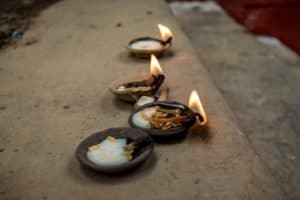 Butter lamps placed by the devotees on the first day of Indra Jatra, on Tuesday. Photo: Nischal Baidya

Similarly during the day, families who lost their loved ones in the year also walk around the city visiting different bihars and temples, while placing lit butter lamps in their memory along the way.

For the second day the procession goes uptown, with its route starting from Basantapur through places like Pyaphal, Yatkha, Nyata, Tengal, Nhyokha, Nhaikan Tol, Asan, Kel Tol, Indra Chok, Makhan, and back to Basantapur.

As for the third day, the chariot procession goes midtown which starts from Basantapur and goes through Pyaphal, Yatkha, Nyata, Kilagal, Bhedasing, Indra Chowk, Makhan, and back to Basantapur.

All three days, the procession starts with pulling of Goddess Kumari’s chariot and ends when it reaches its position. 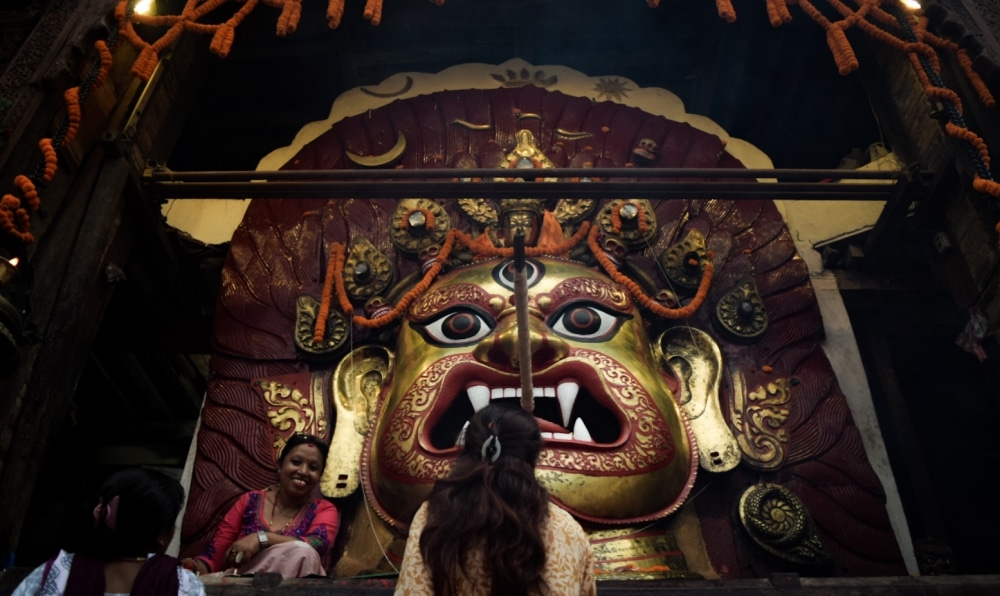 Mask of Swet Bhairab on display for Indra Jatra in Hanumandhoka, on Tuesday. Photo: Nischal Baidya

During the Festival, many masks of gods are put on display. Masks of Swet Bhairab and idol Kaal Bhairab are worshiped in Hanuman Dhoka, while mask Aakash Bhairab is worshiped at Indra Chowk. An idol of Indrayani (depicting Lord Indra as prisoner) is put on display at Maru. They are displayed for about seven days until the Festival is finally over. 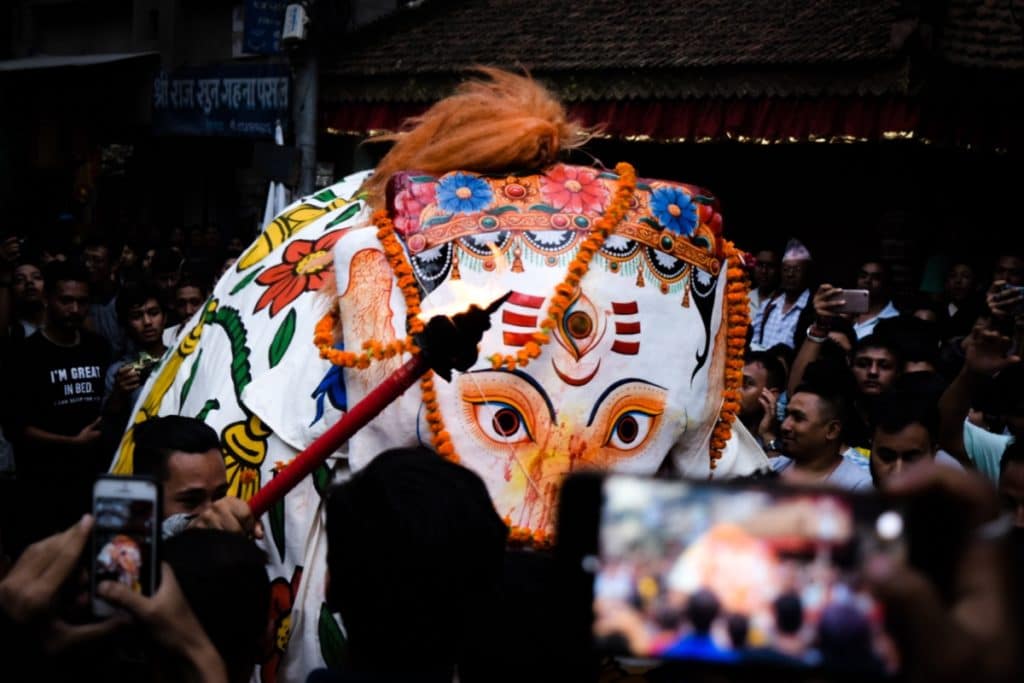 Along with the display of masked deities, different masked dances are performed in various parts of the town. Main attractions include dance of Pulu Kishi (Lord Indra’s vehicle), Lakhey (demon) with Jhyalincha are performed in this event. Other masked performance include traditional dances like Sawa Bhakku, Devi Pyakhan, and Mahakali Pyakhan. They are performed at Hanuman Dhoka, Jyasidewal, Indra Chowk during the Festival.

Music is also a major part of this Festival. At Indra chowk, Indra bhajan and other instrumental music are performed every evening. All the masked performances have their own classical, instrumental music. And during the three-day procession, different groups of individuals from guthis and clubs precede or follow the chariots playing traditional instruments. The common people dance on the streets to this music and enjoy the festival as well. 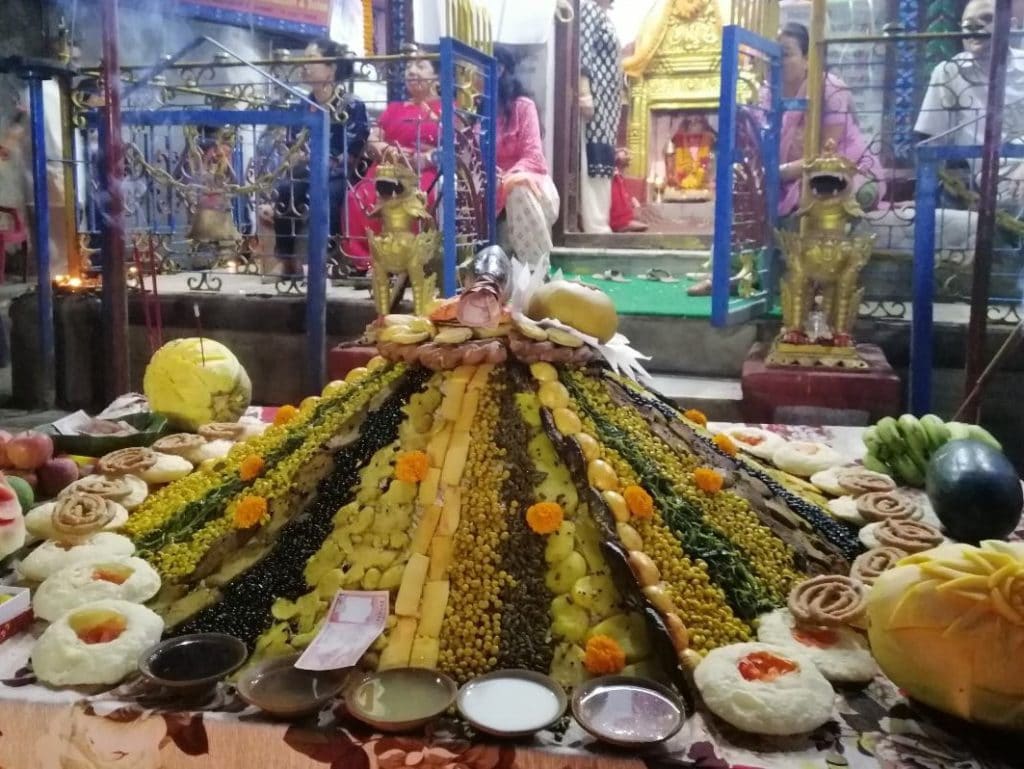 Samaybaji is a traditional dish eaten as a prashad (offering) in Indra Jatra. At various locations of town, guthis and clubs display a decorated Samaybaji during the festival.

Samaybaji, on display, consists of different food items and it depends on how people want to decorate it. But all of them have a base of beaten rice, in shape of a mountain. The base is then decorated with different items in different columns on its sides and is offered to the gods.

On the top of this mountain, a Lakhmari (local sweet bread), a raw fish  (with a boiled egg in its mouth), Woh (pancake made of black lentil paste). People also couple it with Ailaa (a home-made alcohol specific to the Newar Community) on small clay vessels around it.

The Indra Jatra festival ends after the Yashi is pulled down. The ceremony is known as Yashi Kwathalegu.