Today is Mahastami, the eighth day of Dashain. As the day is here again, I have one vivid memory of it:

I always felt happy when my grandfather used to chant these very lines. I remember, every time, after chanting it he used to put tika on my forehead on the morning of this day. Then, for me, it meant that I would be getting plenty of money to spend on chocolates. Now, as I read these lines to myself, it reminds me of simpler times. Dashain has come again to Nepal and we, as ever, are welcoming it with open arms.

But one thing that has changed is that the Dashain holidays used to start from Ghatasthapana. Nowadays, the holidays only start from the seventh day of Dashain, Phulpati. But the feeling on this day remains the same.

Today is also referred to by many names, some of them are Mahastami, Durga Astami, Veer Astami, etc. Of the many myths surrounding Mahastami, one of them revolves around the victory of good over the evil. It is said that on this day Goddess Kali, an incarnation of Goddess Durga, appeared to kill the buffalo-demon ‘Mahisasur’. The demon is known for its deception and was a nuisance in many ways, as he could even shape-shift.

According to another myth, it was on this day that Arjun (third of the five Pandava brothers) took out his weapons after the 14 years of exile. He retrieved the weapons from the hole in the  Shami tree where he had hidden it before he left and worshiped them. Since then, there has been a long culture of worshiping weapons on Durga Astami.

More about this day 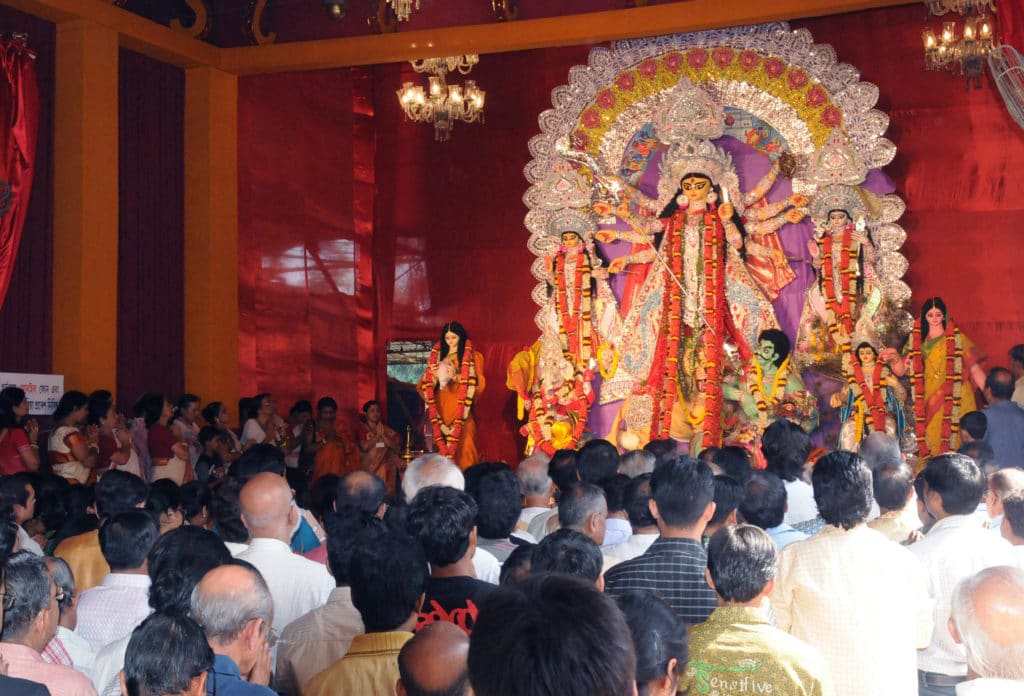 A huge number of devotees participate in Pushpanjali of Ashtami Puja at Kalibari Durga Pooja in New Delhi on October 16, 2010. Photo: Debatosh Sengupta

For Bengalis, Mahastami, which they refer to as Durga Astami is the most important day of the entire festival. People worship the huge clay idol of Goddess Durga, on this day. Durga Astami means Shodashopachar Puja, which is the highlight of the day. In the puja,  they place nine earthen pots in the center, right in front of the Goddess Durga idol. The nine pots symbolize the nine shaktis (powers) of Goddess Durga. In the afternoon, people gather for the puja and Astami bhog.

Surely myths are fascinating but on Dashain, and on Mahastami many sacrifices are carried out in the Goddess shrines of Nepal, which is a terrible thing. The night of Astami is also “Kaal Ratri” (the dark night). A special Kaalratri puja is also held at the Dashain Ghar of Hanumandhoka, Kathmandu, on this day. This night also means the night of death. People sacrifice hundreds of goats, sheep, and buffaloes at Kali’s temples and households. The sacrifice continues till dawn and even till dusk. And people who do not wish to offer animals to the Goddess, offer coconuts and other fruits instead.

It is no secret that there are offerings made to the goddess during Dashain, but maybe it is time to think if killing animals for the sake of religious rituals is necessary?