Dashain is the biggest festival in Nepal. The festival lasts for about 15 days, where in the first nine days we worship the nine forms of Goddesses Durga. The nine days are collectively referred to as Navaratri. The nine auspicious days in Nepal is actually called Navarathaa, where Nava means nine, and Rathaa means night. As per the Hindu mythology, Goddess Durga killed a demon named ‘Mahisasur’. Hence, Navarathaa recalls this mythological incident as one of the greatest victories against evil. Here are the nine forms of goddess Durga we worship during Navarathaa. 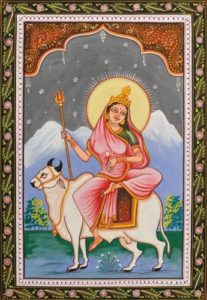 Of the nine forms of goddess Durga, on the first day of Navarathaa or Pratipada, we worship Goddess Shailaputri. Here, Shaila means mountain and Putri means daughter. Born to the Lord of Himalaya, the other name of Goddess Shailaputri is Hemavati, and also Parvati. She is the ultimate form of Mother Nature.

Various Vedic scriptures mention that Shailaputri is the reincarnation of Devi Sati. Goddess Shailputri has a crescent moon on her forehead. Moreover, she also holds a lotus flower on the left hand and a trident on the right. She rides on a bull (Nandi). She is an embodiment of the power of Brahma, Vishnu, and Mahadev. In astrology, Goddess Shailaputri governs the Moon. 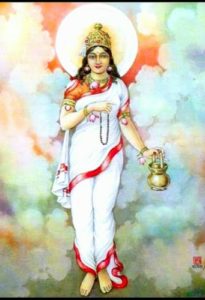 On Dwitiya, the second day of Navarathaa, we worship Devi Brahmacharini. Brahma means self-existing spirit and Charini means the feminine version of ‘Charya’, which also means occupation. Bhramacharini in Vedic text means a female who pursues the sacred religious knowledge.

Goddess Brahmacharini drapes white clothes, holds a prayer bead in her right hand and a Kamadalu (an oblong-shaped water pot with a handle) in her left hand. Likewise, she governs the planet Mars in Vedic astrology. 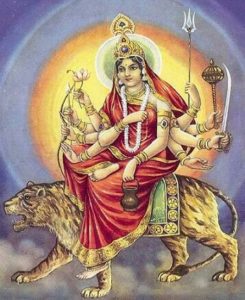 The third day of Navaratri is dedicated to Devi Chandraghanta. Chandraghanta consists of two words – ‘Chandra’ and ‘Ghanta’. Chandra means moon and Ghanta means bell. Goddess Chandraghanta has a bell-shaped mark of the moon on her forehead. Hence, the name Chandraghanta. Moreover, her third eye is always opened. She is the goddess of internal strength. She is also called Chandika, Ranachandi, and Chandrakhanda.

Goddess Chandraghanta rides a tigress. Similarly, she carries Trishul, Gada, Sword, and Kamandalu on each of her four hands on the left and keeps the fifth left hand in Varada Mudra whereas lotus, arrow, Dhanush (bow), and Japa-mala (prayer beads) on her four right hands and keeps the fifth hand in Abhaya Mudra. Also, it is believed that worshiping Goddess Chandraghanta will eliminate all sins, distress, physical as well as mental sufferings, and all hurdles of the devotees. In astrology, she governs the planet, Venus. 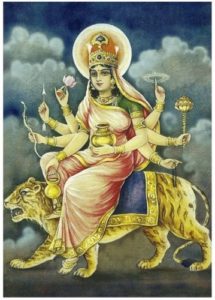 Of the nine forms of goddess Durga, we worship Devi Kushmanda on the fourth day of Navarathaa, or Chaturthi. The word ‘Kushmanda’ consists of three words where Ku means little, Ushma means warmth, and Anda means egg. Goddess Kushmanda has eight hands. Therefore, her other name is Astabhuja Devi. Goddess Kushmanda holds Amrit Kalash (a pot of Amrit – the elixir of life), Japa-mala, Gada (mace) and Chakras on her left hands and Kamandalu, Dhanush, Bada and Kamal on her right. Likewise, Goddess Kushmanda blesses her devotees with supernatural powers (siddhis) and wealth (Nidhi). She rides on a lioness and rules the Sun, as per astrology. 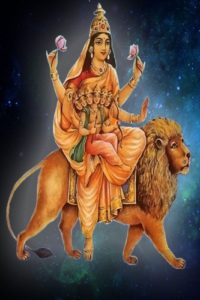 Similarly, she is also the ‘Goddess of Fire’ carrying Skanda on her lap. Devotees who worship this form of Goddess also get the blessings of Lord Skanda, the God of War. She rules the planet Mercury in astrology. 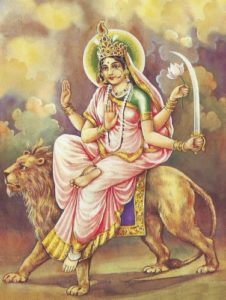 The other name of Goddess Katyayani is Devi Mahalaxmi. Of the nine forms of goddess Durga, she is the sixth form and is worshiped on the sixth day. Goddess Katyayani was the daughter of Katyayana, born to destroy the demon Mahishasura. And she is best known for her anger, vengeance and ultimate victory over the demons.

As per the Vedic books, Goddess Katyayani rides on a magnificent lion. Furthermore, she carries a lotus flower and a sword on two of her left hands and keeps her right hands in Abhaya Mudra and Varada Mudra. She rules the planet Jupiter in astrology. 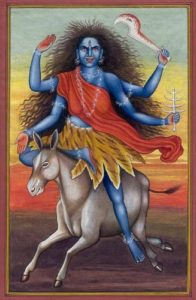 Of the nine forms of goddess Durga, the most fierce form of Goddess Durga is Goddess Kalaratri. In Kalaratri, Kaal means time and Ratri meaning night. So it also means the night of death. Considered greater than the time, we worship the Goddess on the seventh day of Navarathaa, or Saptami.

Also, her complexion is dark and she rides a donkey. Her right hands are in Abhaya Mudra and Varada Mudra respectively, carrying a sword and a deadly iron hook on her left hands. Goddess Kaalratri makes her devotees fearless. She rules the planet Saturn as per astrology. 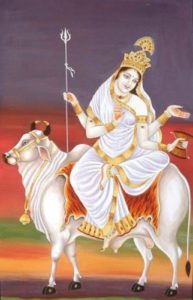 Out of the nine forms of goddess Durga, we worship Goddess Mahagauri on the eighth day of Navratri, or Asthami. She is considered the teenage avatar of Devi Shailputri. Goddess Shailputri was extremely beautiful at the age of sixteen and blessed with a fair complexion. She is also named Mahagauri because of her fair complexion and is called the goddess of purity and cleanliness. She rides a bull and has four arms. 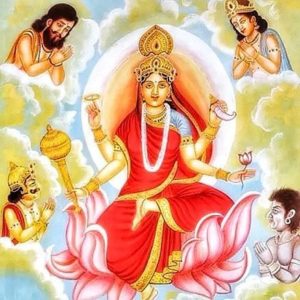 We worship Goddess Siddhidatri on the ninth day of Navarathaa, or Navami. Here, Siddhi means meditative ability and Datri means giver. Her name literally means the one who gives divine knowledge. Likewise, it is said that one side of Lord Shiva’s body is that of Goddess Siddhidatri in the Ardhanareshwor form. Goddess Siddhidatri fulfills all the aspirations of her devotees.

According to the Vedic scriptures, Lord Shiva attained all the divine meditative knowledge by worshiping Goddess Siddhidatri. Goddess Shiddhidatri sits on a lotus and has four hands. She blesses all types of divine knowledge to her devotees. Humans, Gandharvas, gods, and even demons worship Goddess Siddhidatri. She governs the south node of the Moon, Ketu.

All the nine forms of Goddess Durga celebrate women’s power during the Dashain festival. So, Navarathaa or Navaratri is the festival that celebrates the victory of good over evil. The Navarathaa ends on the tenth day of the Festival or Vijayadashami, where people receive the Tika and Jamara from their elders. Navaratri is celebrated in various countries of South Asia including Nepal, India, and Bhutan.