Kathmandu Triennale 2020, in collaboration with Martin Chautari, initiated their new discussion series on the Nepali art history. Under it, a two-hour discussion panel “Crucial Role of Artist-Led Initiatives in Nepal- I” was held in their complex, Thapathali, on Thursday, January 2.

The panel talked about their challenges in Nepal in the art field, the government’s role in supporting art, the spirit of working as a team, and other contemporary scenarios that represent art. The discussion was followed by a set of questions by the moderator about the artists’ journeys.

It was deemed important to re-define the notion of art. Since communication is lacking in the art sector among the artists, it is necessary that an environment is created where artists help and support one another. Also, in the Nepali context, new ideas seemed to be lacking as everyone just follows one idea.

Renowned artists from the panel have been engaging themselves in doing so for the past few decades. To bring multiple ideas in art, an artist needs to work with others, support, encourage and motivate others to work on their own ideas.

Kathmandu Triennale has been working to promote art in Nepal with a focus on the role of the artist. It is not just about giving continuity to promote the art field but also touching other aspects of society. Retrospecting over the Nepali art history, the panelists shared their journey of working, their visions and programs in the related field. 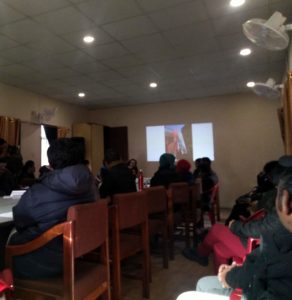 Erina Tamrakar shared her experience of group work and how they gave continuity to art. For her, art was not about working individually but to come together in a sphere and to work parallel. She believes art is more like a platform that acts as a bridge between seniors and juniors. When they come together they teach and learn things from one another.

Ashmina Ranjit spoke about how she experimented in bringing art out of the box. Being an art activist, she shared her experience of how people see art as an object. She even shared her intentions to change the perspective, considering the event as a movement.

Prithvi Shrestha shared concerns to promote art among young artists. It was also a challenge for his group to convince people who don’t consider print art as a difficult form of art. However, he showed that print required the same level of ideas and effort as any other form of art. So his group shared ideas among those artists who have visited abroad or have been outside Nepal to study arts.

Meanwhile, Manish Lal Shrestha talked about his experience of making an interactive space for art. His major concern is about how to flourish the Nepali artists. He said there are a lot of challenges in being independent in this sector. It is about practicing and being professional.

Panel Discussion on Nepali art history and beyond

There has been a noticeable change in Nepali art history after the ’90s. This series on art can be taken as a movement towards further progress.

The art sector now has given more liberty to break the stereotypes over time and express oneself. Art, in general, is about the use of mediums and ideas simultaneously. The artists believe that, if not in use side-by-side, the result is quite repetitive. A creative person won’t just stick on one idea but move beyond, to re-define them.

The alternative of promoting art is to go beyond the stereotypes. Panelist Ashmina also mentioned about the need for changing the perspective of people. Another alternative could be the birth of a new genre of artists, according to Erina.

The panel also discussed support from the Government side in promoting art and lack thereof. One main challenge discussed was the financial aspect. Lack of financial support affects the promotion of arts, which is why artists are seeking help from the government.

But so far, it was discussed, that the government has been less supportive in the matter of art and not really aware of its importance. Consequently, young artists and volunteers also show less interest when they don’t see the benefits financially. Thus, the continuity of certain programs is problematic.

In Nepal’s context, choosing a creative approach is still a challenge. Ideas come when artists engage in working under a variety of genres. It is the artists’ passion-driven works that sustain the art scenario. With Nepali art history as a reference, the panelists agreed there must be a concept when it comes to art and that has to be unique. Moreover, they stressed that the ideas come when artists work together and share their ideas with one another.