Vastu Shastra comes from the same ancient Hindu scripture as yoga, meditation, and the first medicine, Ayurveda, come from.  It is thousands of years old and predates any other known written information pertaining to all things that exist within our world, from astronomy to music to healing. The application of ancient Vastu science is timeless and trusted. Nowadays Vastu is gaining its popularity not only in the Indian subcontinent but also in the west. As urbanization is growing rapidly, people are demanding to have their house built according to the Vastu requirements. So, What is Vastu? Is Vastu Science Or Superstition?

Is Vastu Science Scientific or, superstition or, just plain religion?

In Sanskrit, Vastu means “dwelling” and Shastra means “Science”. Originated from traditional Hindu ideology, Vastu Science is based on integrating nature with architecture and Hindu belief. Vastu Shastra not only deals with the architectural layout of the building, but also for temples, cities, gardens, business, roads, waterworks, and other civil infrastructures works. The core feature of Vastu is the Vastu Purus Mandala and incorporates the position of bodily and supernatural forces. In Vastupurush mandala, each square is allocated for each god and is suited for a particular purpose in the house. 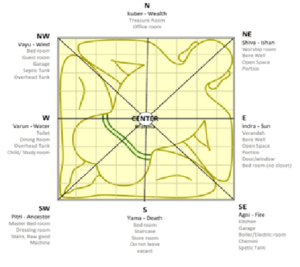 Vastu suggests house should be square or, rectangular shaped and should be symmetric, which allows maximum positive energy flow. Regular shape building is considered safer from the earthquake and also load distribution is proportional from a structural engineering perspective.

Yoga: A Pathway to Cosmic Consciousness

We get maximum exposure to sunlight in the south direction, north direction gets least sunlight and east and west also gets a good amount of sunlight. In this perspective, putting store/treasure/puja room in north direction makes sense so that we can utilize other space for a bedroom and open spaces. Also, morning sunlight is considered very good and leaving open space. Creating verandah/ balcony in the east will allow more sunlight and fresh air to enter the house. 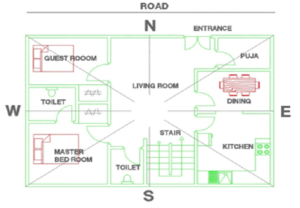 Vastu Shastra considers the energy of the sun, earth, sky, wind, magnetic, thermal, cosmic, and light to provide pleasure, peace, and prosperity. It describes the ideal and good position for each room type. It also suggests combining opposite forces together will bring bad luck in family e.g. putting kitchen and toilet together. Though everything in vastu is not scientifically proven or, explained and many people consider it as superstition, still it helps to layout your floor plan and put open space in the house. This makes you at least psychologically satisfied thinking you avoided Vastu dosh or, defects.

Professional architects/engineers also suggest to follow Vastu principles and there are consultancies dedicated to vastu based designs. If you are planning a new house, Good Luck with your new vastu designed home.

Why Nepalese Can’t Get Along: A Diagnosis of the Problem