I have often wondered why Nepalis smile a lot.  Foreigners see Nepalis as happy people even though Nepal is ranked as an economically poor country.  So is economic prosperity really a sign of happiness?

Here are four things I know: 1) A smile is considered a sign of happiness. 2) Many people think that economic prosperity is necessary for happiness.  3) Nepali people smile a lot.  4) Nepal is economically a poor country.

If statements 1 and 2 are correct, that suggests that Nepali people are economically prosperous. But statement 4 says that Nepal is ranked as an economically poor country.  So can that really be the reason why Nepalis smile alot?  Since I know statement 3 is true (Nepalis do smile a lot), is it possible that either statement 1 or statement 2 is incorrect?  This has led me to examine the matter further.

My professor who smiled a lot

When I was in high school in Kathmandu, I used to go to the home of a college professor for tuition in English. He was a pleasant person, so at first, I thought that it was because he smiled while he talked.  But he smiled all the time, even when he was displeased with me. Naturally, that confused me because I did not understand his state of mind.  I felt I was dealing with a cross-eyed person, not knowing in what direction he was looking at.

I didn’t think my professor had any neurological disorder because a person who has a neurological disorder exhibits uncontrollable episodes of laughing, crying, or both that are either exaggerated or contradictory to the context in which they occur.  So his smile, which was almost fixed or frozen on his face, may have been from a rare case of physiological disorder about which I knew nothing.

After spending several months with him, I discovered that he had some kind of disorder that prevented him from controlling his facial muscles involved in smiling.  At the time I didn’t know that such an involuntary smile existed, let alone know what it was called.  After some research, I discovered that the symptom that my professor exhibited is was closest to a disorder called “Duchenne Smile.”  But the disorder was connected to a smile of happiness, and he certainly wasn’t showing the sign of happiness.

Then, what was it?

Another medical term for an involuntary smile is called Pseudobulbar Affect, which causes the person to smile, laugh and even cry uncontrollably. But certainly, not all Nepalis have either of them. Then, why Nepalis smile a lot?

Whatever the condition my professor was going through, it’s true that his smile was a byproduct of happiness.  However, some people who are truly happy don’t necessarily display it through smiles or laughter.  They feel their emotions internally, but choose to express their emotions in different ways.  The sources of happiness are many and can be expressed in different ways—a smile is just one of them.

Similarly, economic prosperity is not the sole cause of a person’s happiness. Prosperity can, in fact, bring a lot of unhappiness to a rich person, as we have seen in many economically developed countries.

The result of my rumination and personal observation tell me that a major cause of happiness is contentment: a state of not wanting more, just being happy with what one has.  Or simply put, it seems that the worry-free life is the main cause of happiness, as Dan Buettner has shown in his book, The Blue Zones.

Returning to why Nepalis smile a lot: 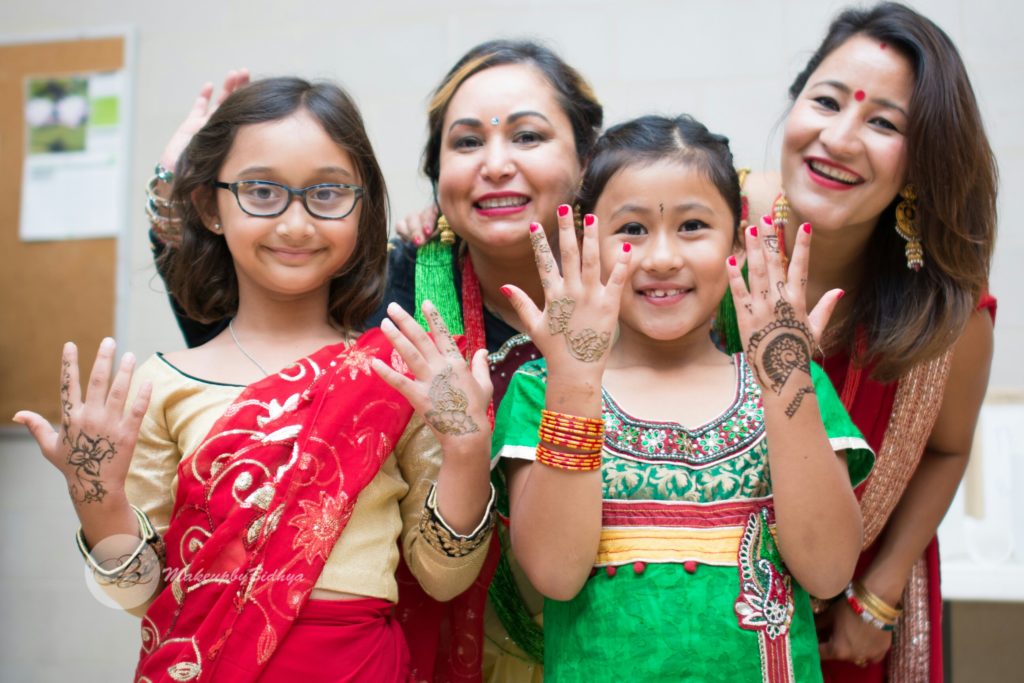 My research shows that it has to do with the Nepali language they speak.  Let me explain.  The Gorkhali language which the majority of Nepalis speak is loaded with the long ‘a’ sound. Forming that vowel sound causes the sides of the speaker’s mouth to stretch side-ward into the shape of a smile. If you say the long ‘a’ sound aloud, you can see what I mean.

Many Gorkhali words use the long ‘a’ vowel, such as raamro, haamro, aaraam, aalu, maasu, bhaaloo, saag, bhaat, daal, tarkaari, saathi, bhaai, aakaash, paani, shaanti, to name just a few.  Even the hot chili pepper (khursaani) has a long vowel sound.  All these Gorkhali words cause the speaker’s mouth to stretch in the shape of a smile, giving the impression that the Nepalis smile a lot.  So, apart from whether or not they are happy, it is the language they speak that makes them smile.  And once the habit is formed it becomes part of their culture, so to speak.

I am here reminded of a story that may explain that the history of smile and happiness is in Nepali’s DNA.  When I was a boy, my older brother told me a story about a boy who was happy all the time.  Surely the story wasn’t based on a real incident; it was more like a fairy-tale.

Once upon a time, there was a boy who used to play in the street, laughing for no apparent reason.  One day, right at that moment he was playing and laughing to himself, a funeral procession went by. Some members of the family were crying and beating their chests.  One of the family members saw the boy who appeared to be happy because he was laughing. The mourner beat him up and demanded that he join with them by crying for it was an occasion of mourning.  So out of fear, the boy did as he was told.

As he sat there crying, another procession came by.  This time it was a wedding party where the procession was jubilant—a group of men playing musical instruments, while some were singing and dancing.  When one of the members saw the boy crying, he beat him up for crying because it was a happy occasion—a time of celebration.  The poor boy got totally confused.  No matter what he did he was punished.

The moral of the story was that one can’t please all of the people, all of the time.

Beside the moral of the story, happiness is the goal of human existence.  We all want to be happy, but happiness can’t be bought by economic success. Surely, happiness means different things to different people.  For instance, for some, a sense of peace and quiet is likely to produce happiness, and yet for others this very same sense of solitude may be experienced as colorless, boring, or perhaps even painful.  This too speaks to the elusive nature of happiness. At least in terms of externals, there are no measurements when it comes to its exact recipe.

Today the topic of happiness is vitally important.  The use or abuse of opioids has swept the country on an epidemic scale which is plaguing society.  Clearly, individuals are abusing opioids in the name of seeking for happiness.  Some individuals who can’t cope with real pain must use it to reduce their pain.  But sadly, most do it simply to get high or to be in what they feel is the state of happiness.  That’s a real issue and I call it “Happiness at any cost,” even the cost of losing one’s life. The Center for Disease Control reports that 72,000 Americans died from drug overdose in 2017.  This statistic includes death from illicit drugs and prescription opioids.

As another example, in our own society, we have many restaurants and clubs that offer a “Happy Hour,” during which “happy” customers receive a discount on alcoholic beverages.  This may indeed generate some measure of happiness in the short-term, and yet how many of these customers remain happy long after the happy hour has ended?  To experience sustained happiness, we have to change our outlook on life and priorities in life.

We have to find the source of happiness within ourselves, not in external distractions or addictions.  And, yes, we have to smile a lot.  A smile actually helps our facial muscles to stretch and relax whenever we experience a small measure of happiness.  I think that is why Nepalis smile big and wide while greeting a tourist, specially in the villages. They feel genuinely happy to meet an outsider.