Years ago, women began fighting for equal rights. Fast forward to 2017, and we’re still fighting. Except that we now have slight (slight!) freedom to pick our battle — and our choice of weapon.

Let’s face it, not all of us have the luxury of disappearing for a day, or even marching! In this age of rampant bigotry — some of us have more to lose than others —  our nationality, race, identity, immigration status all standing to become collateral damage against our search for equality. That doesn’t mean we stop fighting because we never stop fighting. We just burn the hate and give it right back to them, instead of burning bras out on the street (although if you’re an activist, more power to you!)

Not doing what everybody else is doing, does not/should not make you feel like you’re less of a feminist. Feminism is not war — it is a state of being. Of being equal to men, and doing normal things in normal ways that don’t degrade you or make you feel small because of your gender.  So this women’s day/month/year, be proud. Be a feminist. One day, one step at a time — this is how you become a warrior: 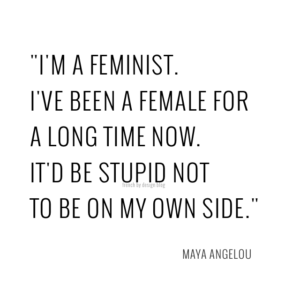 Show up. If you cannot disappear, do the next best thing: show up. Show up to life. Day after day after day. If they can’t stand a woman, try giving them a relentless woman.
Refuse. Respectfully. Say no to traditions you don’t understand or cultures that belittle you. Say no to restrictions that aren’t necessary. Say no to conventions that serve no purpose. If it doesn’t help you grow or make you happy — refuse to accept it as the norm.
Build –  your life is a work of art. Pick up the war paint, and get to work. The more effort you put in, the better it will look. Do yourself and the world a favor — build a life you’re proud of.
Rise above ignorance. Educate if you can, walk away if you cannot. You cannot protest away someone’s ignorance if they’re unwilling to let go of it on their own.
Surround yourself with your own feminist army. Of women (and men!) who are feminists. Who support equality and each other. Who know better, want to do better and have good intentions.
Question. You’d be surprised by how much you can learn when you pause for a moment to find an answer you thought you already knew. Help rid the world of blind assumptions and baseless rituals. Start by examining your faith— and build on the answers you find, not on what was drilled into you because you were born somewhere.
Make noise. Be heard. If you can speak, do so. If you can’t speak, try a gesture. Then another. Then another, until you’re heard.
Be wise about picking your battles. We can’t all do everything, at all times. Use your energy as if it were made of gold (or whatever you find valuable). Use only what you can replace. The idea of giving yourself away for a greater cause is fascinating until there is no more of YOU left to GIVE. To help others, help yourself first.
Respect – Yourself. Other people. Things. Food. The planet. Life. Other lives. Work. Your battle scars and story.
Be yourself. Clichéd as it might be, there is no better way to flaunt your feminism than to be utterly, unapologetically yourself. Something amazing happens when you begin accepting yourself – you become a champion of your own cause. You become an advocate for your own well-being. And because you are a social animal and don’t live in a silo, your well-being depends on other’s well-being just as much. So you become a champion for other people’s well-being too.

And that is how you change the world with feminism – one good soul at a time!

Read more from the author