Foods are liked by everyone. Its taste, size, combination varies from culture to tradition and person to their requirement. Mostly, Nepali food is simple, normal, healthy as well as delicious. Various ethnic groups in Nepal have their own specialty and originality of their food. Living in one of the most developed parts of Nepal; Kathmandu is the luckiest moment for tasting varieties of food. Different restaurants in cities offer Indian, Chinese, Korean, Thai, continental foods as well as 84 special dishes(84 byanjan)of Nepal. Food and culture are the winning combinations. In the past, there was a thought that people who eat gundruk and dhendo were supposed to be of lower-income but nowadays eating those food items is considered great.
I feel really proud to explain the food of my country where every Nepali has love and respect towards every food item. I mostly prefer eating national food items rather than pizza, burgers, sandwiches, noodles, and so on, influenced by international societies. My favorite food is selroti with achar which is typically made in Nepalese societies during occasions such as Dashain, Tihar, Birthdays, Janai Purnima, Wedding, Bratabandha, etc.

Selroti is also known as Nepali Donutwhich is circular in shape typically made with rice flour adding various other ingredients. Selrotis are mouth-watering food that can be enjoyed with sour, spicy pickle made of cucumber, bitter gourd lapsi. Also, it can be enjoyed with yogurt, hot beverages, and fried vegetables. It is said to be best when it is eaten fresh and it becomes chewy, tasty, and tougher the longer it is kept. It is also a tea time snack,as we see many people serving deliciously with tea. Selroti is the most popular Nepali dish due to its crispy and sweet taste of rice which is unique in its own way.

Selroti is made by the flour of different varieties of rice. For the preparation: rice flour, water, ghee, oil, sugar, pan, broach(jhir) are the most essential ingredients. Rice flour should be kneaded by keeping water sugar and other spices and kept it covered for 8-10 hours. Then, we should heat the pan and put ghee or oil in it. After the ghee gets heated, start cooking it in a ring shape. For the perfect circular Sel roti, there are various machines available in the market. Then, it should be cooked and turned until it is golden brown in color. 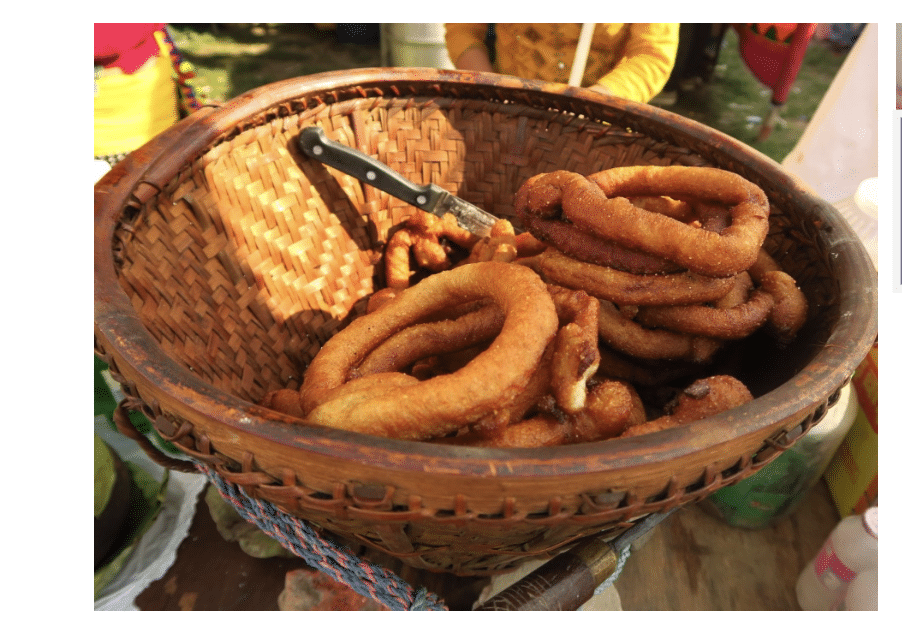 After that, it can be served with pickles. Selroti is not only tasty but also very nutritious. The ghee kept while preparing, it contains proteins, fats which makes our body healthy and increases immunity power. Similarly, the rice flour consists of carbohydrates which provide energy and helps to make our body attractive.

Really, when we put it into our mouth, the roti produces crunchy and crispy sound with delicious inner filling in it. Not only the people of one culture, people of every culture, but every Nepali is also known to it. It seems really very tasty also by its outer appearance. The sweet taste, good filling, and the tasty pickle served with it makes me feel I am tasting the most delicious food in the world. When I see people eating Sel roti, I see them catching a roti, opening a big mouth and chewing and tasting in a most satisfying way of thinking: “Wow! such a wonderful taste.”

Its admirers are growing day by day as well as on the other hand people are forgetting Nepali food items because of the influence of varieties of pizzas and burgers. Moreover, we should not forget our national foods and make them renowned all over the world with varieties of unique food items.
At last but not the least, various Nepali items including selroti should not be forgotten but liked, loved, and eaten by all the Nepalese so that we could make it famous all over the world.